HEADLINE Tomb owner confirmed as son of 'Marquis of Haihun'

Tomb owner confirmed as son of 'Marquis of Haihun' 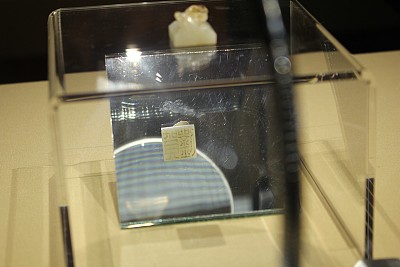 The picture taken at an relics exhibition shows the seal bearing the characters "Liu He" . It was this very seal that helped archeologists to identify the tomb owner. (Photos: VCG)

At the tomb of the "Marquis of Haihun" in East China's Jiangxi Province, the identity of a tomb owner has been confirmed to be the eldest son of the controversial Chinese emperor Liu He.

Archaeologists said Friday, that a metal seal reading "Liu Chongguo" was unearthed from the No. 5 tomb at the Marquis of Haihun site, China's most intact Western Han Dynasty (206 BC- 25 AD) cemetery.

Li Cunxin, a researcher with the Chinese Society of Social Sciences, said the seal was discovered along with jade, crystal and agate in the tomb.

However, no remains of bones or teeth have been discovered.

After studying historical records, researchers believe that Liu Chongguo was the eldest son of the Haihun marquis Liu He -- an emperor who was deposed and stripped of his nobility after just 27 days in office, but later made a marquis.

The No. 5 tomb is located north of the tomb of Liu He.

Yang Jun, head of the archaeological team, said only a few items have been found in the nearby No. 4 tomb, and the No. 6 tomb has not yet been excavated. 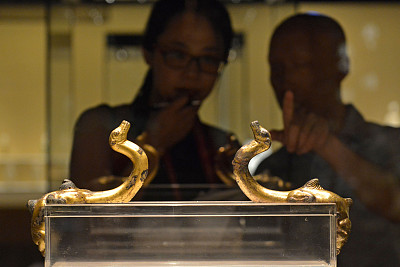 In an exhibition, two visitors take a look at the relics discovered in Maquis of Haihun site.

The excavation of the tomb of Marquis of Haihun began in 2011.

The remains of the marquis were found in a coffin in an interior  chamber and removed in January 2016. A seal inside the coffin bearing the characters "Liu He," the marquis' name, helped confirm his identity. 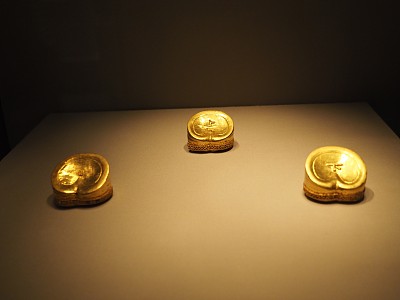 This picture shows three golden hoves excavated from the tomb of Liu He.

Marquis Liu He was the grandson of Emperor Wu, whose reign began one of the most prosperous periods in China's history.