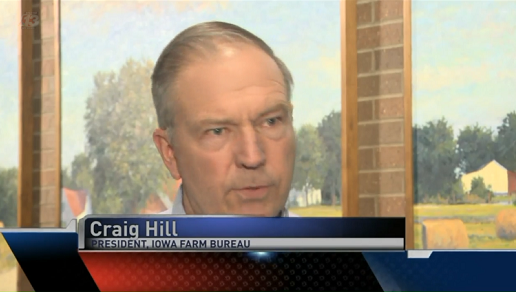 Agricultural leaders in the U.S. state of Iowa warned on Friday that rashly imposed tariffs on Chinese products will make American farmers the first casualties.

Iowa Farm Bureau is a grassroots farm organization with a mission of creating a vibrant future for agriculture and farm families in Iowa.

"I'm a little bit taken aback by this attitude that's come from the White House," said Hill, referring to what he described as "cavalier comments" from Wilbur Ross, the U.S. secretary of commerce, who was quoted as saying that "even shooting wars end in negotiations."

"Shooting wars end in casualties and collateral damage," Hill responded. "It's a very serious matter and Iowa is going to be the first casualty."

Both soybeans and pork are on the list of American products subject to China's higher tariffs as countermeasures.

John Weber, a hog farmer from Iowa who serves as vice president of U.S. National Pork Producers Council, told Iowa Public Television that it will take farmers "a long time to recover from the tariffs that are already implemented or already talked about."

According to the National Pork Producers Council, about 26 percent of total U.S. pork production is sold in export markets and China is a major buyer.

"The growth of our industry is entirely dependent on future export markets...we need to have access to this country," said Weber.

Although farmers in the Midwest state have supported President Donald Trump, however, Hill warned "some minds may be changed" if the trade sanctions get "completely out of control."