Trains to restart from Swiss ski resort after heavy snowfall 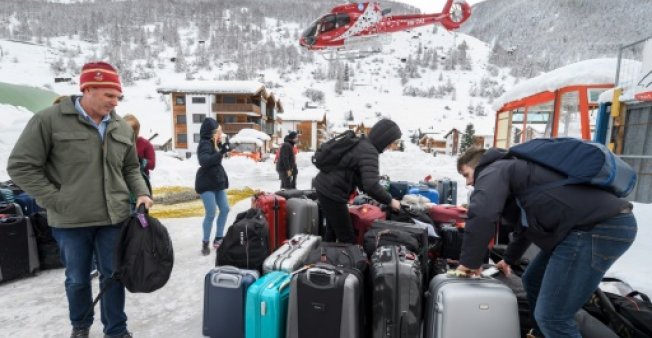 ZERMATT  - Trains from popular Swiss ski station Zermatt are due to reopen Wednesday, providing relief for some 13,000 tourists trapped there by heavy snowfall, a statement said.

Officials in Zermatt had initially said that the first train to the nearby village of Tasch would leave at 11:15 am (1015 GMT), but later announced that the resumption of service had been pushed back.

"The railway cannot operate at 11.15 am as planned due to the difficult removal of snow between Tasch and Zermatt", the statement said.

"The persons in charge are working hard on the reopening and are confident to open the railway in the afternoon," it added.

Tasch is a small Swiss village six kilometres from (3.7 miles) from Zermatt that serves as a gateway for those travelling in the Matterhorn mountain region.

The rail network in Tasch remains closed due to snow, but replacement buses are operating, making it possible for people to reach regional airports.

Extreme weather has caused havoc in several Swiss areas, including in the canton of Bern, where a World Cup downhill training run had to be cancelled due to snow and high winds.

Other areas in the southern canton of Valais have suffered power outages as well as mud and rockslides and flooding, forcing a number of road closures.

After the mid-morning trains out of Zermatt was cancelled, visitors began heading towards the resort's heliport, an AFP photographer said.

A local official in Zermatt, Christian Zioerjen, told AFP that authorities decided to resume airlifts once it became clear that train travel had to be pushed back.

He said the helicopter journey costs "around 200 Swiss francs ($204, 170 euros) per person" and stressed that the flights should not be described as an evacuation.

Helicopters were flying in fresh laundry to hotels, according to the AFP photographer.

The heavy snowfall has caused casualties across the region.

In the French Pyrenees, a skier was killed and another injured after avalanches in Aragnouet on the slopes of Pique Poque mountain.

Meanwhile, in the French Alps, rescuers were looking for a British skier who went missing on Sunday in the resort of Tignes.

In the Italian Alpine resort of Sestriere, where more than two metres of snow fell in 48 hours, an avalanche struck a five-storey building late on Monday, sending a mass of snow and broken branches into its corridors and even into several apartments.

But the 29 people staying there managed to escape unharmed through the garage.

Around 100 people at the resort's converted Olympic village complex, which housed athletes during the 2006 Turin Games, were also evacuated over fears the weight of snow could cause the roof to collapse.

Emergency services struggled to reach people in need of help and a 70-year-old woman was pronounced dead on arrival at the local hospital after the ambulance sent to pick her up was delayed by a fallen tree.