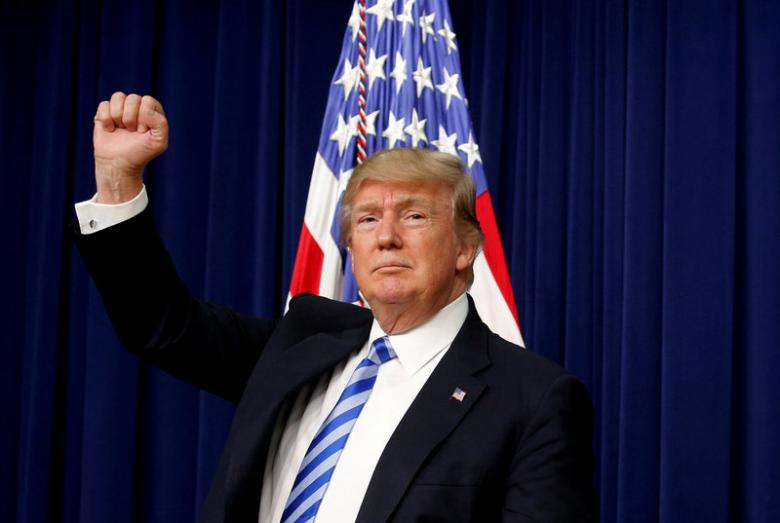 US President Donald Trump pumps his fist as he departs a CEO town hall on April 4, 2017.  File photo: Reuters

Trump’s first year in office will go down in history as the most talked about rookie year of any US president. But it is how people have responded that makes 2017 unique. It’s a reaction US media has labeled the “Trump effect.”

Trump’s visit to China may have been the most anticipated event of the year.  When President Xi Jinping visited Trump at his Mar-a-Lago resort in Florida earlier in the year, he invited him to China. When Trump arrived in Beijing in November, it was the first time the presidents of both countries visited one another in the same year.

Trade agreements were reached, and deals were signed. It was a signal to the world that bilateral relations between the two nations were on a win-win path.

And newspaper owners secretly love Trump, while their staff writers rail against him. He has inspired people to start paying for news once again. Digital news subscription rates have been on the rise since the day after Trump won the election.

Within weeks after his victory, Trump nominated Elaine Chao (R) for Secretary of Transportation. She had previously served two cabinet terms as Secretary of Labor under the Bush administration, making her the first Asian American to hold a cabinet seat in US history.

Political pundits are still trying to figure out why Exxon/Mobile CEO Rex Tillerson was picked to run the State Department, while many are still wondering why he hasn’t been fired.

When Trump visited Beijing in November, it was diplomacy on display, China style.  US Secretary of State Rex Tillerson accompanied the president throughout Asia.  Consolidation and downsizing are corporate tactics that work in the business world but not when it comes to diplomacy, and hopefully Tillerson has learned this by now.

It was reported that since running the State Department, roughly 100 Foreign Service officers have resigned or they’ve been let go, and applications are down 50 percent this time last year.

Tillerson was presented with the Order of Friendship, the highest honor Russia bestows upon foreigners, by Russian President Vladimir Putin.

But now we have Susan Thornton, a Trump nomination, who will serve under Tillerson. Fluent in Russian and Mandarin, Thornton’s presence indicates how bilateral relations with China remain a priority.

Trump has single-handedly saved Twitter, but the social media platform has never made a lot of money.

Twitter doubled its character capacity from 140 to 280, giving users more room to put their thoughts in one single tweet.  Trump was notorious for breaking off his tweets, treating them like cliffhangers, sometimes waiting hours before finishing them.  Twitter executives said the decision was a financialone and not inspired by Trump.

As for his campaign promises, he delivered on a few.

He promised to repeal Obamacare and got as far as a mandate rollback,which only undermines the health measure.

In May, Trump signed a $1.1 trillion spending bill so the lights at Capitol hill could stay on through the third quarter.  Tucked inside the bill was the Rohrabacher - Blumenauer Amendment, a measure prohibitingfederal authorities from using federal dollars to go after medical marijuana businesses.

Trump promised to exit the Paris climate agreement because he felt it was waste of US taxpayer dollars, and on June 1 he delivered.  And he’s weeks away from telling NAFTA goodbye as sixth-round talks convene on January 18.

He delivered on filling the vacant Supreme Court justice seat, and his Neil Gorsuch nomination was met with Congressional approval.

2018 could be the year for marijuana as California voters approved to make recreational use legal.  Analysts have predicted the state could earn up to 700 million for the year.  Whatwas once considered a poison has now become a remedy for US states running out of ways to make money.