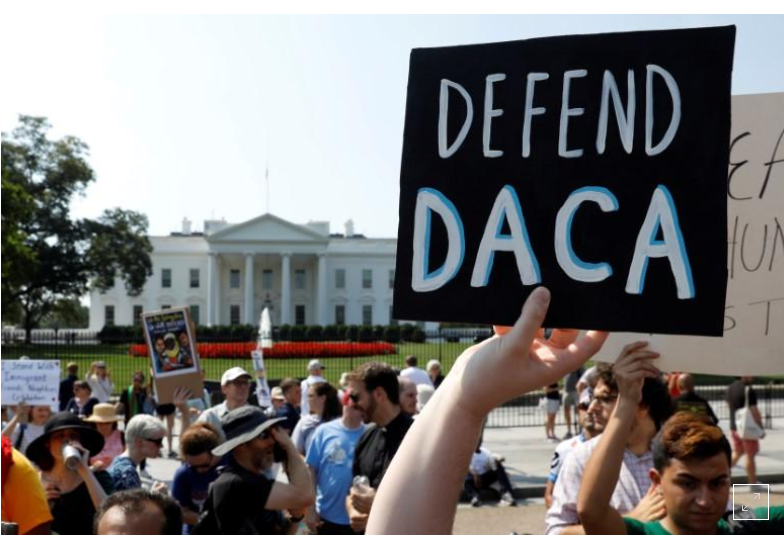 Demonstrators protest in front of the White House after the Trump administration today scrapped the Deferred Action for Childhood Arrivals (DACA), a program that protects from deportation almost 800,000 young men and women who were brought into the US illegally as children, in Washington, US, September 5, 2017. Photo: Reuters/Kevin Lamarque

The US Justice Department asked the Supreme Court on Thursday to quickly overturn a lower court ruling that blocked President Donald Trump’s move to end a program that protects hundreds of thousands of immigrants brought to the United States illegally as children.

Solicitor General Noel Francisco said in a court filing “time is of the essence” and asked the high court to rule on the case before its current term ends in June.

The Republican president in September rescinded, effective in March, the Deferred Action for Childhood Arrivals, or DACA, program put in place in 2012 by his Democratic predecessor, Barack Obama. Trump asked the Republican-controlled Congress to come up with a legislative fix, which it has not yet done.

The administration is challenging a Jan. 9 decision by San Francisco-based US District Judge William Alsup, who ruled that DACA must remain in place while the litigation is resolved.

The Justice Department did not file an emergency application that, if successful, would result in the judge’s ruling being put on hold within days. That means the program will remain in effect until the Supreme Court resolves the case.

A decision could take more than a year if the court takes up the case but declines to speed up resolution of it issuing a ruling in its current term.

About 800,000 young, mostly Hispanic adults dubbed “Dreamers,” have been protected from deportation and allowed to work legally in the United States since the program was implemented. As of September, when the most recent figures were made available, 690,000 young adults were protected under the program.

Alsup’s ruling came during negotiations between Trump and congressional leaders over immigration policy. Those talks fell apart after Trump rejected a bipartisan deal and provoked outrage with his reported use of vulgar language to describe African countries in a meeting with lawmakers on immigration.

The Justice Department’s move to go directly to the Supreme Court is unusual because the administration is essentially seeking to circumvent the 9th US Circuit Court of Appeals, which previously ruled against it over Trump’s temporary travel bans on people entering the United States from seven Muslim-majority countries.