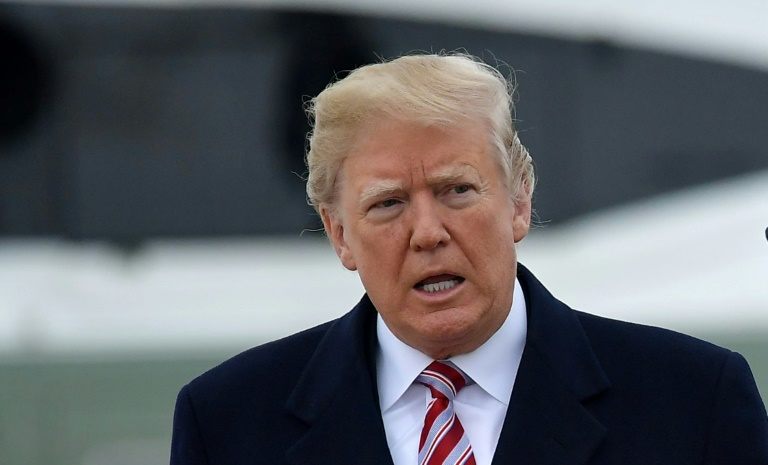 Donald Trump says that fired FBI director James Comey, whose new memoir portrays the US president as morally unfit for the office, is guilty of 'major crimes' (Photo: AFP)

Donald Trump fired back Monday at James Comey, saying he is guilty of "many crimes," as the former FBI director opened a book tour with an interview in which he labelled the US president "morally unfit" for office.

Trump accused Comey of lying to Congress and exonerating Hillary Clinton in a 2016 investigation because of her strong poll numbers in the presidential race.

"Comey drafted the Crooked Hillary exoneration long before he talked to her (lied in Congress to Senator G)," Trump fired in an early morning tweet.

"Then based his decisions on her poll numbers. Disgruntled, he, [former FBI deputy director Andrew] McCabe, and the others, committed many crimes!"

Late Sunday, Comey launched a publicity tour for his new memoir, "A Higher Loyalty: Truth, Lies and Leadership," with an ABC television interview in which he branded Trump a serial liar who will "stain everyone around him."

Comey's book, which leaked out last week ahead of its official release Tuesday, takes on the president who fired him in May 2017 over the troubling Russia election meddling investigation, a probe that poses a deep threat to Trump's 15-month-old presidency.

Comey is schedule to give interviews on the book to major television networks this week and travel to a dozen cities to promote the book in person.

Trump "talks about and treats women like they're pieces of meat" and "lies constantly about matters big and small and insists the American people believe it."

"The challenge of this president is that he will stain everyone around him," he told ABC.

Trump and the Republicans have sought to stifle the impact of his book by accusing Comey of leaking classified materials and of corruptly handling the 2016 investigation into Clinton.

The Republican Party set up a website to attack the book, branding him "Lyin' Comey."

Trump called Comey an "untruthful slime ball" and said it was his "great honor" to fire the veteran Justice Department prosecutor.

"Slippery James Comey, a man who always ends up badly and out of whack (he is not smart!), will go down as the WORST FBI Director in history, by far!" Trump said Sunday.

"Look, it's been very clear that James Comey is a self-admitted leaker. He lied to Congress," she said.

In his book, Comey likens Trump to a dishonest, ego-driven mob boss and says he demanded the then FBI chief's personal pledge of loyalty.

That damning account has infuriated the president at a moment of intensifying legal pressure on other fronts.

And last week federal agents in New York raided the office and hotel room of Trump's longtime personal lawyer and fixer Michael Cohen, possibly in connection with secret hush payments he made to women claiming they had affairs with Trump.

In his interview Sunday, Comey said Trump could be guilty of obstruction of justice in the way he tried to get the FBI to drop a probe of one of his staff in early 2017.

"I think it's possible. I don't know," Comey said.