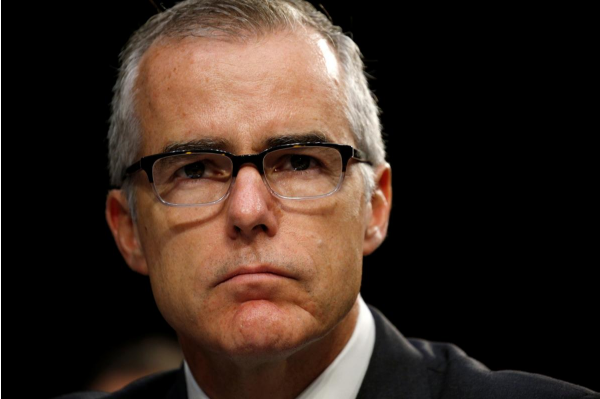 Democrats and other Trump administration critics on Saturday attacked the firing of No. 2 FBI official Andrew McCabe as a politically motivated and vindictive move, while some Republicans praised U.S. Attorney General Jeff Sessions for decisive action.

Sessions fired McCabe late on Friday, just two days before the FBI official would have been eligible to retire with a full pension, saying an internal Justice Department watchdog found he leaked information and misled investigators.

McCabe, who played a key role in the FBI probes of Hillary Clinton and Russian interference in the 2016 U.S. election, said he believed he was fired for corroborating former FBI Director James Comey’s claim that President Donald Trump had tried to pressure Comey into killing the Russian investigation.

Trump described McCabe’s firing as a “great day” in a post on Twitter on Friday, prompting a scathing response from John Brennan, a former head of the Central Intelligence Agency during the Obama administration.

“When the full extent of your venality, moral turpitude, and political corruption becomes known, you will take your rightful place as a disgraced demagogue in the dustbin of history,” Brennan wrote on Saturday.

“It also is a reflection on the administration’s disdain for the FBI itself. I just think this is outrageous. The Department of Justice, the FBI, should be independent and this type of political behavior should be unacceptable,” Cardin said.

Democratic Senator Kamala Harris, who serves on the judiciary and intelligence committees, called on Sessions to testify before Congress to determine whether McCabe’s firing was a retaliation against those investigating Russian election interference and Moscow’s alleged ties to Trump’s campaign.

Republican Representative Bob Goodlatte, who heads the U.S. House of Representatives Judiciary Committee, said in a statement on Saturday that McCabe’s actions had “tarnished” the FBI’s reputation.

Comey has testified that he believes his own firing by Trump in May was a move to undermine the FBI’s investigation of possible collusion between the Russians and Trump campaign officials. Trump has denied such ties.

After Comey’s ouster, Trump said in a televised interview that he fired him over “this Russia thing.”

Deputy Attorney General Rod Rosenstein tapped Special Counsel Robert Mueller to lead the Russia probe after Sessions recused himself from the investigation due to his role in Trump’s campaign.

Trump’s personal lawyer, John Dowd, said in a statement on Saturday that Rosenstein should follow the “brilliant and courageous example” set by Sessions’ firing of McCabe, urging him to “bring an end to alleged Russia Collusion investigation manufactured by McCabe’s boss James Comey.”