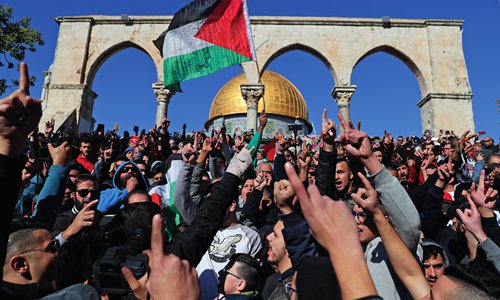 Palestinian Muslim worshippers wave their national flag and shout slogans in front of the Dome of the Rock mosque at the al-Aqsa mosque compound in Jerusalem's Old City on Friday. Photo: AFP

The UN Security Council met Friday to discuss US President Donald Trump's decision to recognize Jerusalem as Israel's capital amid widespread international condemnation and protests across the Middle East and other parts of the world.Trump's decision will likely endanger US nationals, complicate the Middle East and separate Palestine, Chinese experts agreed.Eight countries on the 15-member UN Security Council requested a meeting on Friday including the UK, Italy and France, to discuss the US announcement on Wednesday of recognition for Jerusalem as Israel's capital with plans to relocate the US Embassy there, Reuters reported.Hua Liming, former Chinese ambassador to Iran, told the Global Times on Friday that "Trump's decision has stirred up a hornet's nest since it further complicates the situation in the Middle East and also brings danger to Americans globally."US embassies and Americans should take care as there are reports of protests and attacks on US embassies like when US soldiers kicked the Koran," Hua said, adding that the counter-terrorism efforts will be challenged once IS takes advantage of the anti-US trend and revives.  The Pentagon reportedly confirmed that a soldier from Guantanamo Bay in Cuba deliberately kicked the Koran. The story stirred worldwide controversy and sparked protests among Muslims with many going out on the streets chanting anti-US slogans, the Associated Press reported in June 2015. Trump's decision has alarmed many overseas Americans with US diplomatic staff and families operating under tightened security restrictions, the Guardian reported on Friday.Protests took place across the Middle East. Demonstrators near the US embassies in Amman, Jordan, torched the US flag and pictures of Trump. In Tunisia, thousands joined peaceful protests in Tunis and other cities,the Guardian reported.Thousands of protesters in Indonesia and Bangladesh rallied on Friday to condemn the US decision and authorities tightened security outside US embassies in some Asian cities, Reuters reported.The US decision may separate Palestine as the Palestine Islamic group Hamas wanted to take stronger action against the US, Hua said.Hamas leader Ismail Haniya was quoted by aljazeera.com as saying the US decision is a "war declaration against Palestinians," and called for a new uprising.Chinese Foreign ministry spokesman Geng Shuang told a daily briefing on Thursday that China supports the just cause of the Palestinian people to restore their legitimate national rights and stands behind Palestine in building an independent, fully-sovereign state along the 1967 borders with East Jerusalem as its capital."China calls on all parties to remain committed to resolving disputes through negotiations and promoting regional peace and stability in accordance with relevant UN resolutions," Geng said.The Chinese Embassy in Israel released a notice on Thursday, reminding Chinese tourists to be cautious about their plans to visit controversial regions of Israel and Palestine, including the old town of Jerusalem and the West Bank."Please maintain a high alert, strengthen security protection and keep away from crowded areas… Please keep in touch with the embassy once there is an emergency," the release read. World leaders also expressed misgivings about the US decision. Palestine and Turkey said that the recognition was in breach of international law and UN resolutions. The Russian foreign ministry said US recognition risked "dangerous and uncontrollable consequences," Reuters reported.