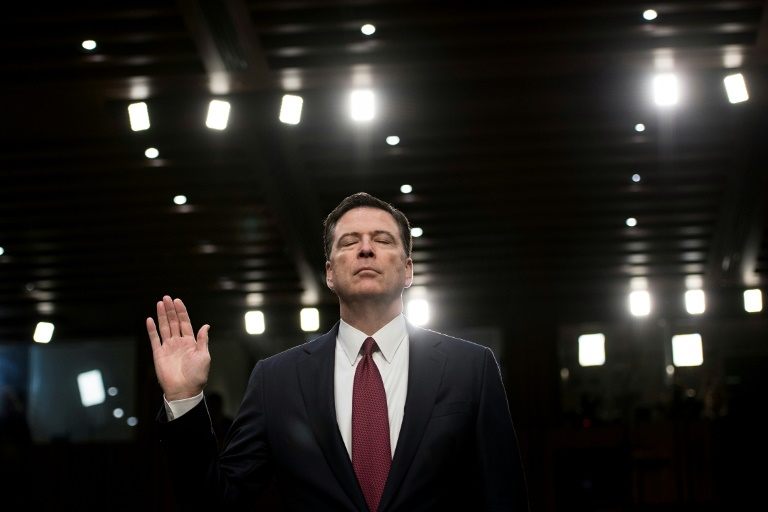 US President Donald Trump called for the prosecution of former FBI chief James Comey on Friday, unleashing a vitriolic response to the lawman's tell-all memoir.

Trump branded Comey weak, a "LEAKER & LIAR" and an untruthful "slime ball" in a two-part Twitter tirade, as the first reports of the ex-FBI boss' highly critical 300-plus-page book emerged.

News organizations including AFP obtained copies of the manuscript, in which Comey portrays Trump as an egomaniac -- "unethical, and untethered to truth and institutional values."

The book is due to be released on Tuesday, but Comey has already appeared on television to promote it and the White House has been strategizing for weeks about how to discredit it.

Trump led the charge himself on Friday, tweeting so far unsubstantiated claims that Comey "leaked CLASSIFIED information, for which he should be prosecuted," and that he "lied to Congress under OATH."

It is rare for a sitting US president to comment on ongoing litigation, much less ask for critics to be prosecuted.

Trump fired Comey in May 2017, citing the FBI's behavior in investigating Democrat Hillary Clinton and its probe into possible Trump campaign collusion with Russia to tilt the 2016 presidential election.

"When I decided to just do it, I said to myself, I said you know, this Russia thing with Trump and Russia is a made up story, it's an excuse by the Democrats for having lost an election that they should have won," Trump said in an interview at the time.

Comey's no holds barred account of his meetings with Trump before he was fired at times appears mean spirited, but also conveys a sense of disbelief about the 45th president's behavior.

Comey said Trump reminded him of a mafia boss who demanded absolute loyalty, saw the entire world against him and lied about everything.

"His leadership is transactional, ego-driven and about personal loyalty."

The US president lives in "a cocoon of alternative reality" that he tried to pull others around him into, Comey adds.

Meetings with Trump gave Comey "flashbacks to my earlier career as a prosecutor against the Mob," he says.

Comey also claims that the US president is obsessed with the alleged existence of a video showing Russian prostitutes said to be hired by Trump urinating on each other in a Moscow hotel room.

The former FBI boss also mocks the size of Trump's hands -- an issue that featured in the 2016 campaign -- and the "bright white half-moons" under his eyes, which he speculates may come from tanning goggles.

"He is a weak and untruthful slime ball who was, as time has proven, a terrible Director of the FBI," Trump responded.

"His handling of the Crooked Hillary Clinton case, and the events surrounding it, will go down as one of the worst 'botch jobs' of history. It was my great honor to fire James Comey!"