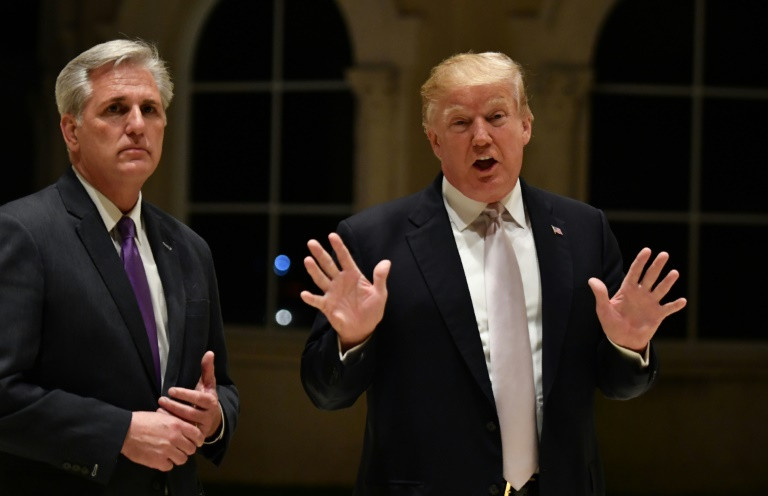 Americans remembered civil rights hero Martin Luther King on his holiday Monday, a day after US President Donald Trump vehemently denied he is a racist amid an uproar over a reported presidential slur.

The denial late Sunday came three days after Trump was quoted as calling African nations and Haiti "shithole countries," setting off a storm of condemnation that threatened to derail a bipartisan compromise on immigration.

"I'm not a racist. I am the least racist person you have ever interviewed," Trump told reporters as he arrived at the Trump International Golf Club in West Palm Beach, Florida for dinner with Republican House Majority Leader Kevin McCarthy.

Trump also denied, once again, making the offensive remarks attributed to him -- despite the insistence of at least one senator that the president used the words repeatedly during a White House meeting on immigration Thursday.

The furor showed little sign of abating Monday, placing America's troubled history of racism on center stage -- and not for the first time in Trump's year-old presidency -- on a national holiday honoring King.

Trump himself marked the day with a videotaped speech posted on Twitter that alluded to King's celebrated "I Have a Dream" speech.

"Dr. King's dream is our dream. It is the American dream," Trump said.

African American leaders, however, expressed deep concern about the direction of the nation under Trump.

"I think this man, this president, is taking us back to another place," said John Lewis, a Georgia congressman who marched with King in the 1960s.

The president of the National Association for the Advancement of Colored People, Cornell Brooks, evoked "the eloquence of Dr. King's example" in a tweet on the holiday.

"While this is the first #MLKDay with an unrepentant & unreconstructed racist in the White House, we are neither intimidated by insult nor tweet — we are prayerful not fearful," he said.

"The guy in control has given people and racism, and negative racism, an opportunity to be out and outspoken without fear. And that's the fearful thing for us because it's with you, and it's around every day," James said after a morning practice.

Black leaders were caught in a surreal moment at the White House on Friday as the storm over Trump's remarks was breaking.

They had gathered to hear the president read a proclamation honoring King. When the ceremony ended, Trump quickly exited the room, ignoring a reporter's shouted question: "Mr President, are you a racist?"

Trump has sought to move off the defensive by accusing Democrats of sabotaging a bipartisan bid to reach a deal on immigration reform.

"We are ready, willing and able to make a deal but they don't want to," he said in a tweet Monday, quoting his own comments to reporters the night before.

Hundreds of thousands of immigrants brought to the country illegally as children -- so-called "Dreamers" -- face deportation unless a compromise can be reached that would grant them rights to stay.

A bipartisan deal to resolve the Dreamers issue in return for changes demanded by Republicans in the way visas are allocated collapsed in acrimony Thursday over Trump's remarks.

Certain Republicans have rallied behind Trump, casting doubt on what he said at the meeting with Republican and Democratic lawmakers.

Senator David Purdue, a Republican from Georgia who attended the session, called charges that Trump is racist "ridiculous" and insisted reports on his remarks were a "gross misrepresentation."

Purdue and another Republican participant, Senator Tom Cotton, had said previously they did not specifically recall Trump making the comments attributed to him.

Senator Dick Durbin, a Democratic sponsor of the bipartisan deal on the Dreamers who was there, said Trump made the quoted "shithole countries" remark not once, but repeatedly.

Senator Lindsey Graham, another Republican participant, told fellow South Carolina Senator Tim Scott the media reports of the comments were "basically accurate," according to the Charleston Post and Courier.

Other Republicans also have criticized Trump, including former Republican presidential candidate Mitt Romney, who tweeted Monday that the sentiments attributed to the president were "inconsistent w/ America's history and antithetical to American values."