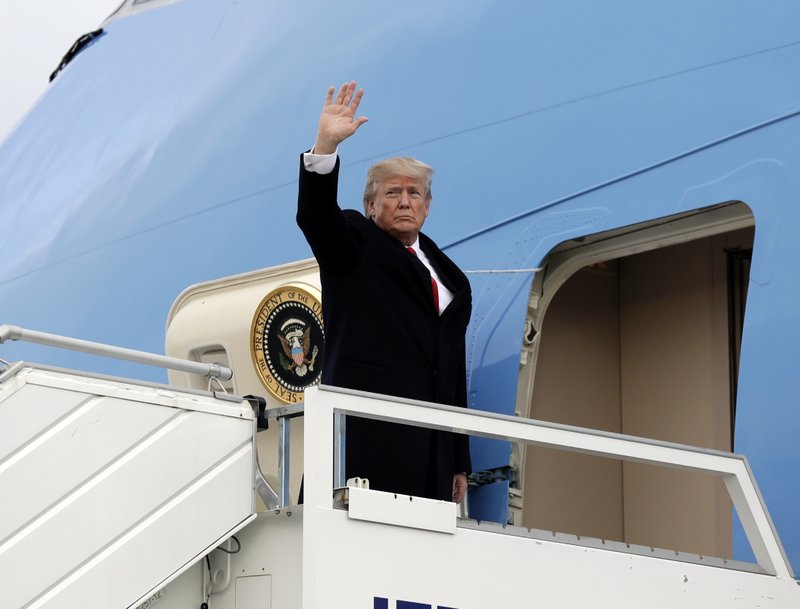 President Donald Trump has departed Switzerland after addressing an annual economic summit in the Swiss Alps.

He is due back at the White House late Friday.

Trump in a speech Friday at the World Economic Forum in Davos declared America open for business under his leadership. He also tried to assure the wary gathering that economic growth taking place in the U.S. under his “America first” agenda benefits the rest of the world.

Trump also held talks with the leaders of Britain, Israel, Switzerland and Rwanda during the summit, and had dinner with European business executives in the interest of encouraging them to invest in the U.S.

Next week, he delivers his first State of the Union address to the American public.

President Donald Trump is airing his long-running critique of the news media at the World Economic Forum in Davos.

Trump says during a question-and-answer session with the forum’s founder that it wasn’t until he became a politician that he realized “how nasty, how mean, how vicious and how fake the press can be.”

His comment prompted some boos and hisses in the room.

Trump was asked by the forum founder Klaus Schwab about how his past experiences prepared him for the presidency.

Trump says a businessman had never been elected president.

He says he was often “treated well” by the news media when he was a New York City developer but that treatment changed when he entered politics.

President Donald Trump says he’s willing to negotiate trade deals individually or as a group with the countries that remain in a trans-Pacific trade deal that he pulled the U.S. out of after taking office.

Trump said in a speech at the World Economic Forum in Davos, Switzerland, that trade needs to be fair and reciprocal. He says unfair trade “undermines us all.”

Trump says the U.S. is prepared to negotiate mutually beneficial bilateral trade agreements with all countries, including those in the Trans-Pacific Partnership.

Trump directed his trade representative to withdraw from the sweeping pact that involved the U.S. and 11 other Pacific Rim nations last year.

Trump says he will negotiate “if it is in the interests of all” sides.

President Donald Trump is getting a muted response during his speech at the World Economic Forum.

Trump is making his debut appearance before the crowd in Davos on Friday. He drew some applause when he took the podium, but many in the audience kept their hands at their sides, reserving judgment.

As Trump showcased his economic agenda, the audience kept quiet, with no pockets of clapping that other leaders might receive. The president received polite applause when his speech ended.

When Forum chairman Klaus Schwab introduced Trump, he drew some hisses when he said that Trump’s leadership could be subject to “misconceptions and biased interpretations.”

President Donald Trump is showcasing the American economy in his address in Davos, telling financial leaders, “America is the place to do business.”

He says his work is beginning to pay dividends. He’s pointing to 2.4 million jobs created since his 2016 election and noting that companies like Apple are planning to invest billions in the U.S.

President Donald Trump is bragging about the “tremendous crowd” at the World Economic Forum in Davos, Switzerland.

He says the gathering has a “crowd like they’ve never had before.” Trump is attending the forum for the first time.

The president spoke to reporters briefly as he arrived at the annual gathering of financial and political leaders.

The president was asked about the report on Friday as he arrived at the annual World Economic Forum in Davos, Switzerland.

The White House says President Donald Trump is looking forward to declaring at the World Economic Forum that America open for business.