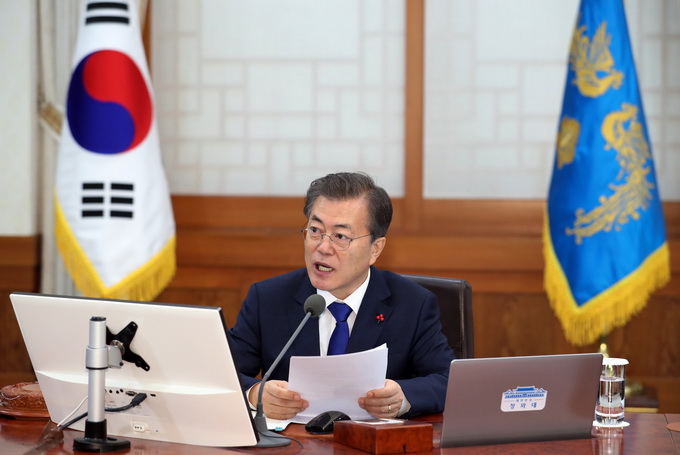 The talks were held on Tuesday on the South Korean side of the demilitarized zone, which has divided the two Koreas since 1953, after a prolonged period of tension on the Korean peninsula over the North’s missile and nuclear programs.

Seoul and Pyongyang agreed at Tuesday’s talks, the first since December 2015, to resolve all problems between them through dialogue and also to revive military consultations so that accidental conflict could be averted.

“I think President Trump deserves big credit for bringing about the inter-Korean talks, I want to show my gratitude,” Moon told reporters at his New Year’s news conference. “It could be a resulting work of the U.S.-led sanctions and pressure.”

Washington welcomed Tuesday’s talks as a first step toward solving the North Korean nuclear crisis. The U.S. State Department said it would be interested in joining future talks, with the aim of denuclearizing the North.

Washington had raised concerns that the overtures by North Korea could drive a wedge between it and Seoul, but Moon said his government did not differ with the United States over how to respond to the threats posed by Pyongyang.

“This initial round of talks is for the improvement of relations between North and South Korea. Our task going forward is to draw North Korea to talks aimed at the denuclearization of the North,” Moon said. “(It‘s) our basic stance that will never be given up.”

Moon said he was open to meeting North Korea’s leader at any time to improve bilateral ties, and if the conditions were right and “certain achievements are guaranteed”.

“The purpose of it shouldn’t be talks for the sake of talks,” he said.