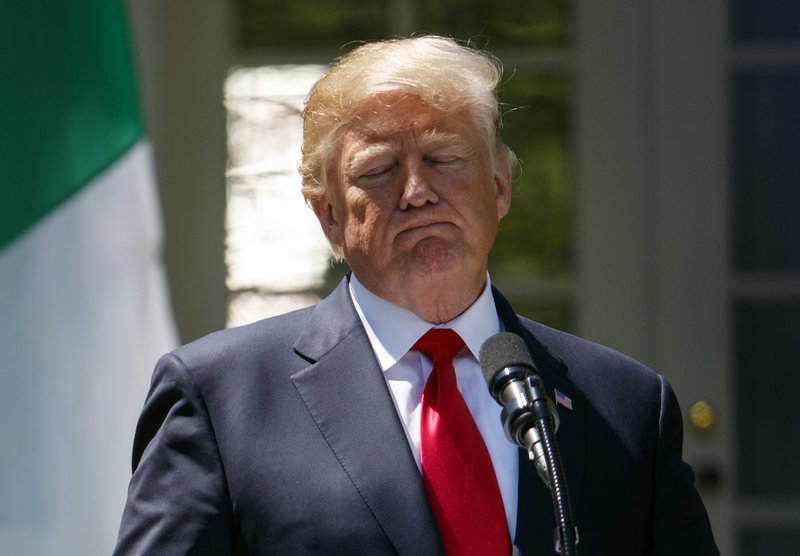 President Donald Trump says it’s “disgraceful” that a list of proposed questions from special counsel Robert Mueller was “leaked” to the news media.

The New York Times late Monday published around four dozen questions compiled by Trump’s lawyers during negotiations with Mueller’s investigators earlier this year over the prospect of a presidential interview. Mueller is investigating Russian meddling in the 2016 election, whether Trump’s campaign was involved and if the president obstructed justice after the campaign.

The Times report said Trump’s lawyers compiled the questions into a list and that document was “provided to The Times by a person outside Mr. Trump’s legal team.”

The questions range from Trump’s motivations for firing FBI Director James Comey a year ago to contacts Trump’s campaign had with Russians. Although Mueller’s team has indicated to Trump’s lawyers that he’s not considered a target, investigators remain interested in whether the president’s actions constitute obstruction of justice and want to interview him about several episodes in office. They have not yet made a decision about an interview.

In his tweet, Trump said there were “no questions on Collusion” and, as he as many times before, called Mueller’s investigation a “Russian witch hunt.” He said collusion with the Russians “never existed.”

In a second tweet, Trump said: “It would seem very hard to obstruct justice for a crime that never happened.”

The questions do appear to indicate that Mueller is looking into possible collusion. Some touch on Russian meddling and whether the Trump campaign coordinated in any way with the Kremlin. In one question obtained by the Times, Mueller asks what Trump knew about campaign staff, including his former campaign chairman Paul Manafort, reaching out to Moscow.

Mueller has brought several charges against Manafort already, including money laundering and bank fraud. None of the charges relate to allegations of Russian election interference and possible coordination with Trump associates, and Manafort has denied having anything to do with such an effort.

One question asks what discussions Trump may have had regarding “any meeting with Mr. Putin,” referring to Russian President Vladimir Putin. Another question asks what the president may have known about a possible attempt by his son-in-law, Jared Kushner, to set up a back channel with Russia before Trump’s inauguration.

Many of the questions obtained by the Times center on the obstruction issue, including his reaction to Attorney General Jeff Sessions’ recusal from the Russia investigation, a decision Trump has angrily criticized.

The queries also touch on Trump’s businesses and his discussions with his personal lawyer, Michael Cohen, about a possible Moscow real estate deal. Cohen’s business dealings are part of a separate FBI investigation.

Additional questions center on Michael Flynn, Trump’s former national security adviser, who has pleaded guilty to lying to the FBI about his discussions on sanctions against Russia with Russian Ambassador Sergey Kislyak during the presidential transition. Flynn is now cooperating with Mueller’s investigators.

“What did you know about phone calls that Mr. Flynn made with the Russian ambassador, Sergey I. Kislyak, in late December 2016?” reads one question. Another asks if there were any efforts to reach out to Flynn “about seeking immunity or possible pardon.”

Flynn was fired Feb. 13, 2017, after White House officials said he had misled them about his Russian contacts during the transition period by saying that he had not discussed sanctions.

The following day, according to memos written by Comey, Trump cleared the Oval Office of other officials and encouraged Comey to drop the investigation into Flynn.