HEADLINE Trump escapes 'swamp' for another Washington, in Michigan

Trump escapes 'swamp' for another Washington, in Michigan 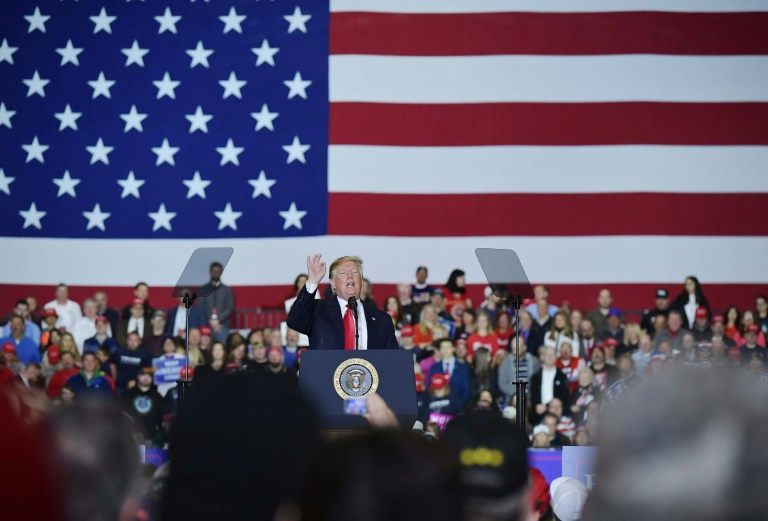 US President Donald Trump -- who frequently attacks the press -- skipped the 2018 White House correspondents dinner, opting instead for a rally in the small town of Washington, Michigan (Photo: AFP)

President Donald Trump swapped one Washington for another Saturday, pointedly opting to connect with American "deplorables" in a Michigan town rather than exchange barbs at the "phony" White House correspondents dinner.

The US leader attended a campaign-style rally in Washington Township, north of Detroit, to tout what his team hails as an economic revival on the same evening that the White House press corps hosts its annual dinner.

"By the way, is this better than that phony Washington White House correspondents dinner?" an animated Trump asked the cheering crowd.

"I could be up there tonight smiling like I love when they are hitting you shot after shot," he said.

"If you don't smile they will say he was terrible. He couldn't take it. If you do smile, they will say what was he smiling about."

Trump, who has frequently attacked the media and its coverage of him since his days as a presidential candidate, snubbed the press dinner for a second consecutive year since taking office.

"Why would I want to be stuck in a room with a bunch of fake news liberals who hate me?" Trump had said in a fundraising email this week authorized by the Republican National Committee.

During his speech Trump fired up the crowd by taking about everything from border control and trade to alleged Russian collusion and the Korean peninsula -- a topic that prompted chants of "Nobel! Nobel!"

The rally, held at a sports complex, was Trump's fifth in the Detroit area since he began his improbable presidential run in 2015.

"For too long the loyalty of Michigan workers was repaid with pure and simple betrayal. You were betrayed. For decades you were dealt one devastating blow after another. Disastrous trade deals which I'm straightening out," he said.

Since coming to office, Trump has repeatedly touted day-to-day stock market increases, jobs data and other positive economic indicators as evidence his administration is succeeding.

US reporters are frequent targets of Trump's ire. He routinely tweets about the "fake news" or the "dishonest media," especially after he sees news reports he believes are unfavorable to him and his administration.

"Trump's absence is part of a bigger pattern," historian Julian Zelizer wrote on The Atlantic's website about the president's plan to skip the dinner.

"Not only has the president been extremely hostile to the press, questioning their legitimacy and vilifying them as enemies of the state, but he has cut off access to almost everyone outside the Fox News-Breitbart orbit," Zelizer wrote, referring to outlets that cover Trump favorably.

"Most notable of all has been his decision to hold just one solo press conference since taking office."

The comedian then unleashed a volley of often vulgar jokes than included nasty personal putdowns.

She was especially hard on women in Trump's sphere: Wolf compared the president's daughter Ivanka to a diaper pail -- shiny on the outside and full of feces -- and said that adviser Kellyanne Conway has "the perfect last name" because "all she does is lie."

Trump last attended the dinner in 2011 as a guest, when he was a reality TV star. Barack Obama famously mocked him for renewing the "birther" conspiracy about the nation's first black president.

"No one is prouder to put this birth certificate matter to rest than The Donald," Obama quipped, as Trump scowled in his seat.

"And that's because he can finally get back to focusing on the issues that matter, like, did we fake the moon landing?"