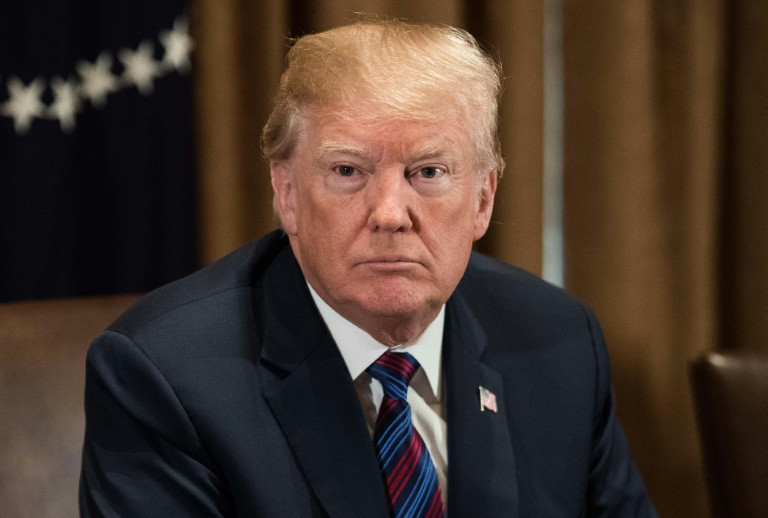 US President Donald Trump was being president Thursday with options for a retaliatory strike against Syria. (Photo: AFP)

President Donald Trump huddled with top national security advisors Thursday to weigh his military options in Syria, as Moscow warned against any move that risks triggering a conflict between Russia and the United States.

The drumbeat of military action appeared to grow louder, as Russia stonewalled diplomatic efforts at the United Nations and France declared "proof" that Moscow's Syrian ally carried out a deadly chemical weapons attack that killed more than 40 Syrians.

"It's too bad that the world puts us in a position like that," said Trump, as Defense Secretary James Mattis headed to the West Wing to present options for a retaliatory strike.

"We're having a number of meetings today, we'll see what happens, we're obviously looking at that very closely," he told lawmakers and governors in the Cabinet Room.

"Now we have to make some further decisions, so they will be made fairly soon," added first-term commander-in-chief, who earlier appeared to equivocate on the timing of strikes.

Since Saturday, when images of ashen toddlers struggling for breath emerged from Douma -- the main city in the Eastern Ghouta enclave near Damascus that has been a crucible of revolt against Bashar Al-Assad's regime -- there has been a sustained military buildup in the eastern Mediterranean.

The Cook -- named after a Marine Colonel who suffered depravation and starvation as a Vietnam prisoner of war -- has past experience tangling with the Russian military, having been deployed to the Black Sea during the recent crisis in Crimea.

Half a world away in New York, Russia's UN ambassador warned the priority in Syria was to avert US-led strikes that could lead to a dangerous confrontation between the world's two preeminent nuclear powers.

Asked if he was referring to war between the US and Russia, he said: "We cannot exclude any possibilities unfortunately."

Trump has slammed Russia for its partnership with "Gas Killing Animal" Assad, spurring concerns that a US strike could lead to a conflagration with Russia, which has major military facilities at Tartus and Khmeimim and works cheek-by-jowl with Syria forces that could be targeted.

US officials have refused to rule out direct military engagement with Russia, with the White House saying "all options are on the table."

But a special hotline for the US and Russian militaries to communicate about operations in Syria is active and being used by both sides, Moscow said Thursday.

- Rebels give up Ghouta -

On the ground in Syria, rebels in Eastern Ghouta surrendered their heavy weapons and their leader left the enclave, signalling the end of one of the bloodiest assaults of the seven-year war and a major win for the Assad regime.

A top leader of Jaish al-Islam, a group which controlled Douma for years, told AFP it was Saturday's attack that forced them to accept a Russian-brokered deal and evacuate.

At the United Nations meanwhile, diplomats were mulling a draft resolution put forward by Sweden and obtained by AFP, that would dispatch a "high-level disarmament mission" to rid the country of chemical weapons "once and for all."

That may prove too little, too late. 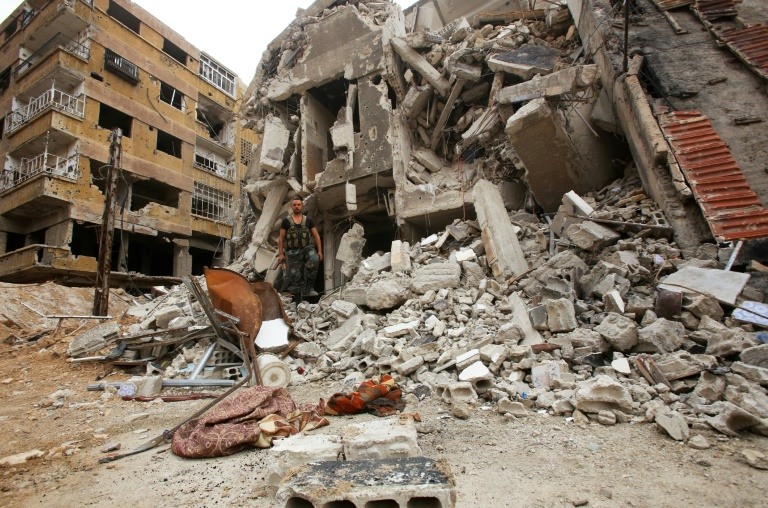 A Syrian soldier walks over the rubble of buildings in the former rebel-held town of Zamalka in Eastern Ghouta, on the outskirts of the capital Damascus on April 11, 2018. (Photo: AFP)

The UN Security Council, tasked with maintaining international peace and security, has been riven, with Moscow virulently denying the Douma attack took place, or postulating that it was carried out by rebels.

The council has already failed to agree on a response to the attack in three votes and has been deadlocked throughout the Syrian civil war.

In Paris, France's Emmanuel Macron upped the pressure on Moscow by stating he had "proof" that the Assad's regime had used chemical weapons, and vowing a response "at a time of our choosing."

In London, British Prime Minister Theresa May held an emergency cabinet meeting to discuss support for US action against the Syrian regime.

But across Western capitals opposition to military action also grew. US lawmakers questioned whether Trump has the legal authority to order strikes without Congressional approval and opposition parties voiced concern.

National security experts worried about whether strikes would actually serve to deter Assad.

But the pinpoint strike did not deter Assad and US officials, speaking on condition of anonymity, have since investigated as many as 10 suspected chemical attacks.

The same officials say Syria has continued to produce or procure chlorine, which also has industrial and agricultural uses.

Syria, which denies carrying out the latest attack, said it had invited the Organization for the Prohibition of Chemical Weapons, which has blamed the regime for previous such incidents, to visit Douma.

The OPCW, which works to rid the world of chemical arms stockpiles, said its experts were on their way to Syria and will start their work on Saturday.