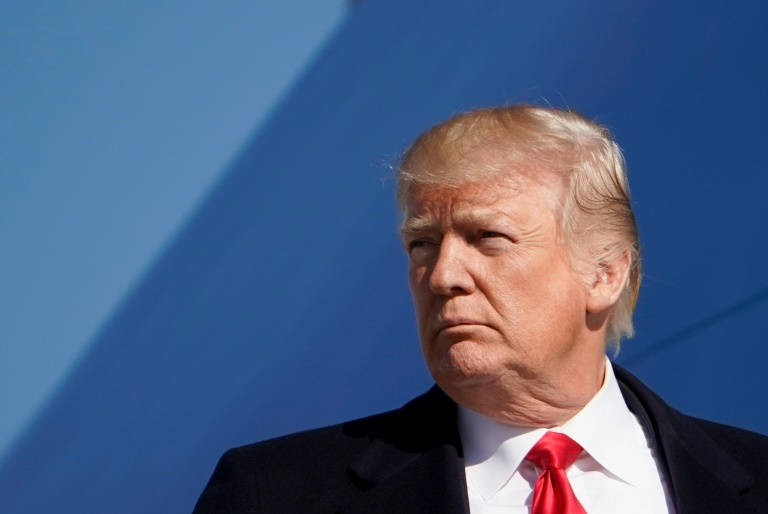 US President Donald Trump marked the first anniversary of his inauguration on Saturday with his government in shutdown, lashing out at Democrats over the collapse of budget negotiations as lawmakers seek to thrash out a deal.

When the clock struck midnight, federal services began to halt or be scaled back in the absence of an agreed spending plan.

Essential services and military activity will continue, but hundreds of thousands of public sector workers will be sent home without wages and even serving soldiers will not be paid until a deal is reached to reopen the US government.

"This is the One Year Anniversary of my Presidency and the Democrats wanted to give me a nice present," Trump, who is in Washington instead of celebrating the anniversary at his Mar-a-Lago resort, wrote on Twitter early Saturday.

"Democrats are far more concerned with Illegal Immigrants than they are with our great Military or Safety at our dangerous Southern Border," he tweeted.

"They could have easily made a deal but decided to play Shutdown politics instead. #WeNeedMoreRepublicansIn18 in order to power through mess!"

Vice President Mike Pence raised the issue of soldiers' salaries after meeting with US military personnel on a stopover in Shannon Airport in Ireland ahead of a three-country tour of the Middle East.

"You have troops headed down range to Kuwait for six months and they are anxious about the fact that they aren't going to get paid right away," he told reporters. "It's unconscionable."

A deal had appeared likely on Friday afternoon, when Trump seemed to be close to an agreement with Democratic Senate minority leader Chuck Schumer on a measure to prevent the expulsion of undocumented migrants who arrived in the country as children.

But no such compromise was in the language that reached Congress for a stop-gap motion to keep the government open for four more weeks while a final arrangement is discussed -- and Republicans failed to win enough Democratic support to bring it to a vote.

The Senate was due to reconvene at noon (1700 GMT) on Saturday. Republican majority leader Mitch McConnell is seeking a new stop-gap measure to fund the government till February 8.

The White House lashed out at Schumer, blaming him for the shutdown and doubling down: Trump's spokeswoman Sarah Sanders declared that he would never negotiate an immigration deal until Congress agrees to resume normal government spending.

"Senate Democrats own the Schumer Shutdown," she declared.

"We will not negotiate the status of unlawful immigrants while Democrats hold our lawful citizens hostage over their reckless demands," Sanders said.

McConnell echoed the White House's language, but Schumer fought back, blaming Trump for leading him to believe a deal was possible on the immigration dispute but then failing to bring his own party along.

Schumer added he had also offered to discuss the possibility of building a wall along the border with Mexico, a key campaign pledge made by Trump that is anathema to many Democrats.

"Even that was not enough to entice the president to finish the deal," he said.

Democrats accused Republicans of poisoning chances of a deal and pandering to Trump's populist base by refusing to fund a program that protects 700,000 "Dreamers" -- undocumented immigrants who arrived in the US as children -- from deportation.

Republicans have a tenuous one-seat majority in the Senate but would have needed to lure some Democrats to their side to get a 60 vote supermajority to bring the motion forward. They fell ten votes short.

The measure brought to Congress would have extended federal funding until February 16 and reauthorized for six years a health insurance program for poor children -- a long-time Democratic objective.

But it would have cut the Deferred Action on Childhood Arrivals program, known as DACA, that affects Dreamers.

White House officials insisted there was no urgency to fix DACA, which expires March 5.

There have been four government shutdowns since 1990. In the last one in 2013, more than 800,000 government workers were put on temporary leave.

"I think our members are frustrated, they're disappointed in the president and members of Congress that they're not funding the government -- doing their job -- as we do our jobs everyday going to work servicing the American people," J. David Cox, the president of one of the largest unions representing government workers, said on CNN.

Negotiations with the White House on a bipartisan compromise on DACA blew up last week after Trump reportedly referred to African nations and Haiti as "shithole countries."