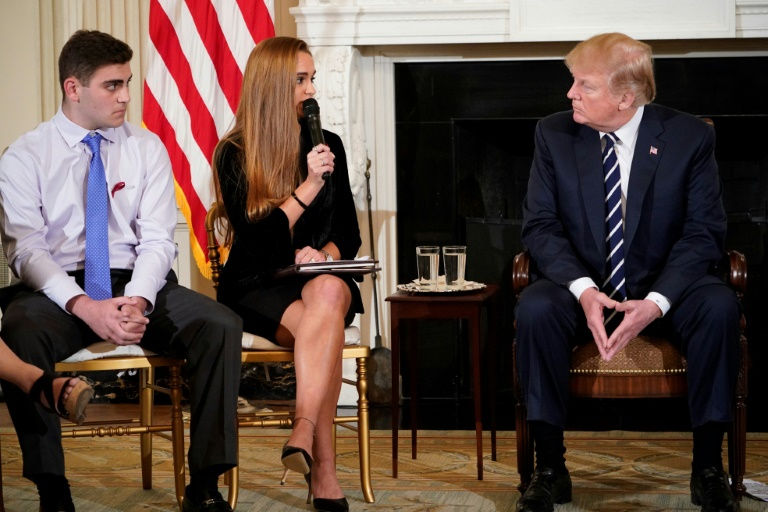 US President Donald Trump held a 'listening session' on gun violence with students, parents and teachers at the White House. Photo: AFP/Mandel Ngan

"I just want to say before we begin, because I want to hear you, but we'll be very strong on background checks, very strong emphasis on the mental health of somebody," Trump told the students from Marjory Stoneman Douglas High School in a meeting in the White House.

Trump also suggested some teachers could be trained in the use of firearms as a deterrent to would-be gunmen.

"This would only be obviously for people who are very adept at handling a gun," said Trump.

"It's called concealed carry. Where a teacher would have a concealed gun on them, they would go for special training and they would be there, and you would no longer have a gun-free zone."

"There are many ideas that I have, many ideas that other people have and we'll pick out the most important ideas and work to get them done. It won't be talk, it's gone on too long."

Julia Cordover, a senior class president at the school, was one of a number of students who pressed Trump to ensure that "no person in this world will ever have to go through" such a tragedy again.

"I was lucky enough to come home from school unlike some of my other class and it's very scary knowing that a lot of people did not have this opportunity to be here," Cordover said as she fought back tears in her address to the president.

"I feel like there is a lot to do and ... I'm confident that you will do the right thing."

Samuel Zeif, who lost a close friend when Nikolas Cruz killed 17 people in his murderous rampage last Wednesday, said it was important to "be strong for the fallen who don't have a voice to speak anymore"

"I don't understand. I turned 18 the day after (the shooting). Woke up to the news that my best friend was gone. And I don't understand why I can still go in a store and buy a weapon of war."

Andrew Pollack, whose 18-year-old daughter Meadow was among the victims, told Trump that it was far too easy for people such as Cruz to acquire weapons.

"I'm here because my daughter has no voice. She was murdered last week and she was taken from us, shot nine times on the third floor.

"We as a country failed our children. This shouldn't happen.

"We go to the airport, I can't get on a plane with a bottle of water, but we leave some animal to walk into a school.

"It is just not right. And we need to come together as a country and work on what is important and that is protecting our children in the schools -- that is the only thing that matters right now."