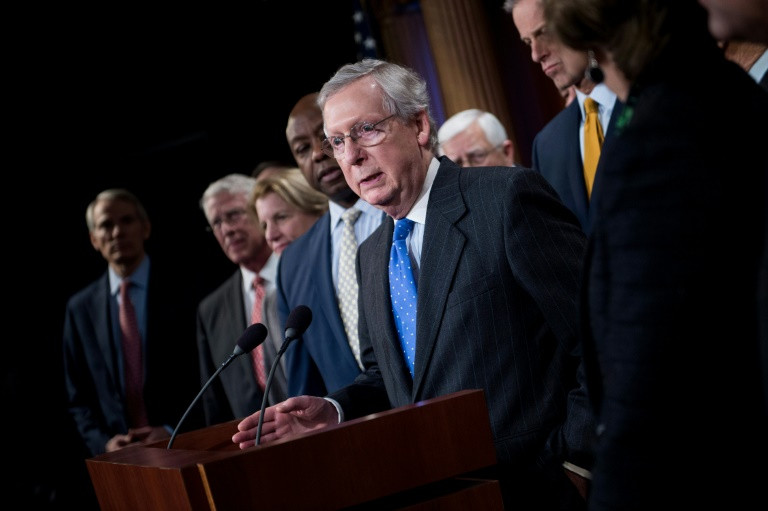 President Donald Trump stood Wednesday on the brink of his first major legislative victory, with US lawmakers poised to give final approval to the most sweeping tax cuts in a generation.

The Senate passed the bill in the wee hours and the House -- which already approved it on Tuesday -- was scheduled for a re-do vote on the $1.5 trillion, deficit-swelling plan, due to a procedural snag.

The deepest rewrite of the US tax code in three decades provides dramatic tax breaks to corporations, and families at all income levels will see their tax drop -- in what Republicans hope will play to their advantage in next year's mid-term elections.

But while Trump casts the reform as a "gift" for ordinary families, it appears unpopular: a CNN poll shows that 55 percent of Americans oppose the tax plan, widely criticized as favoring wealthy people over the middle class.

Republicans have pushed back at that notion, and the president assailed the bill's critics ahead of the House vote.

"The Tax Cuts are so large and so meaningful, and yet the Fake News is working overtime to follow the lead of their friends, the defeated Dems, and only demean," he tweeted.

"This is truly a case where the results will speak for themselves, starting very soon. Jobs, Jobs, Jobs!"

Eyeing the most important legislative victory in the 11 months since his inauguration -- after the stinging failure to repeal his predecessor's health care law -- Trump has demanded the bill reach his desk by Christmas.

House Speaker Paul Ryan predicted that Americans would be won over once they start to reap the benefits.

The Republican Tax Cuts and Jobs Act passed the Senate along strict party lines, 51 votes to 48, with all Democrats united in opposition.

The vote had appeared destined for a dramatic showdown, especially with Senator John McCain's absence due to cancer treatment, meaning Republicans could afford only one defector.

Vice President Mike Pence presided over the chamber in the event he need to break a tie, but the bill ultimately carried through.

If, as expected, the House signs off on the changes, Trump will gather members of both chambers at the White House at 3 pm (2000 GMT) for a celebratory "bill passage event," according to press secretary Sarah Sanders.

The final version of the bill was unveiled only late last week, and Democrats seized on the procedural hiccup as proof that Republicans were rushing to jam the tax cuts through Congress without enough study.

The Republican plan is projected to add nearly $1.5 trillion to the national debt over the coming decade, according to the Joint Committee on Taxation.

That figure drops to about $1 trillion when economic growth is accounted for.

Ryan stated that a median-income family of four earning $73,000 annually would save $2,059 in taxes next year.

The Democratic opposition has denounced the measure as mostly benefiting companies and the wealthiest Americans -- including Trump himself -- and warns it risks blowing a hole in the national debt, which has surged past $20 trillion.

Under the legislation, the federal corporate tax rate would fall from 35 percent to 21 percent, and the maximum individual income tax rate, for the nation's wealthiest, would drop from 39.6 percent to 37 percent.

"Every fundraiser, every fat check from a billionaire, and every champagne and caviar party has been about getting to this day, the day when the politicians they put in charge of Washington would pay them back with a $1.5 trillion giveaway," said firebrand liberal Senator Elizabeth Warren.

While Republicans failed earlier this year to repeal and replace Obamacare, the tax plan takes a key step in that regard, by scrapping the individual mandate that requires nearly all Americans to have health insurance or pay a fine.

Republicans have brushed aside suggestions that opposition to the plan will hurt them in next year's mid-term elections.

"That's an argument we're more than happy to have" heading into 2018, McConnell told reporters.

"If we can't sell this to the American people we ought to go into another line of work."