Trump praises House GOP report of no collusion on Russia 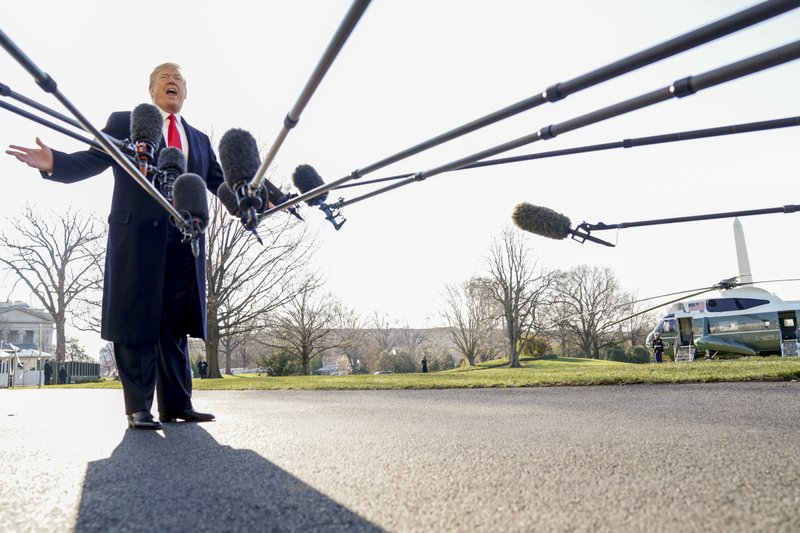 President Donald Trump on Tuesday praised a draft Republican report from the House intelligence committee that says there was no collusion or coordination between his campaign and Russia, thanking the panel for their conclusion.

After a yearlong investigation into Russian meddling, Texas Rep. Mike Conaway announced Monday that the committee has finished interviewing witnesses and that Republicans have already completed a draft report saying there is no evidence of collusion. They are expected to share the document with Democrats for the first time on Tuesday.

Conaway is the Republican leading the House probe, one of several investigations on Russian meddling in the 2016 elections.

The finding enraged Democrats who say Republicans are protecting the president by cutting the probe short. But it thrilled Trump, who told reporters Tuesday morning that the White House is “very, very happy” with the GOP conclusions.

“It was a powerful decision that left no doubt and I want to thank the House intelligence committee,” Trump said.

Conaway previewed some of the report’s findings on Monday, but said the public will not see the full document until Democrats have reviewed it and the intelligence community has decided what information can become public, a process that could take weeks. Democrats are expected to issue a separate report with far different conclusions.

“We found no evidence of collusion,” Conaway told reporters, suggesting that those who believe there was collusion are reading too many spy novels. “We found perhaps some bad judgment, inappropriate meetings, inappropriate judgment in taking meetings. But only Tom Clancy or Vince Flynn or someone else like that could take this series of inadvertent contacts with each other, or meetings or whatever, and weave that into sort of a fiction page-turner, spy thriller.”

In addition to the statement on coordination with Russians, the draft challenges an assessment made after the 2016 election that Russian meddling was an effort to help Trump. The January 2017 assessment revealed that the FBI, CIA and NSA had concluded that the Russian government, at the direction of President Vladimir Putin, waged a covert influence campaign to interfere in the election with the goal of hurting Democrat Hillary Clinton’s candidacy and helping Trump’s campaign.

House Intelligence Committee officials said they spent hundreds of hours reviewing raw source material used by the intelligence services in the assessment and that it did not meet the appropriate standards to make the claim about helping Trump. The officials spoke on condition of anonymity because they were not authorized to speak publicly about the intelligence material.

Conaway said there will be a second report just dealing with the intelligence assessment and its credibility.

The Office of the Director of National Intelligence issued a statement soon after the GOP announcement, saying it stood by the intelligence community’s findings. DNI spokesman Brian Hale said the office will review the findings of the committee’s report.

According to Conaway, the report will agree with the intelligence assessment on most other details, including that Russians did meddle in the election. It will detail Russian cyberattacks on US institutions during the election and the use of social media to sow discord. It will also show a pattern of Russian attacks on European allies — information that could be redacted in the final report. It will blame officials in former President Barack Obama’s administration for a “lackluster” response and look at leaks from the intelligence community to the media.

It will include at least 25 recommendations, including how to improve election security, respond to cyberattacks and improve counterintelligence efforts.

Democrats have criticized Republicans on the committee for shortening the investigation, pointing to multiple contacts between Trump’s campaign and Russia and saying they have seen far too few witnesses to make any judgment on collusion.

The top Democrat on the intelligence panel, California Rep. Adam Schiff, suggested that by wrapping up the probe the Republicans were protecting Trump. He called the development a “tragic milestone” and said history would judge them harshly.

Republicans “proved unwilling to subpoena documents like phone records, text messages, bank records and other key records so that we might determine the truth about the most significant attack on our democratic institutions in history,” Schiff said.

The report is also expected to turn the subject of collusion toward the Clinton campaign, saying an anti-Trump dossier compiled by a former British spy and paid for by Democrats was one way that Russians tried to influence the election. Conaway did not suggest that Clinton knowingly coordinated with the Russians, but said the dossier clearly “would have hurt him and helped her.”

Conaway also said there was no evidence that anything “untoward” happened at a June 2016 meeting in Trump Tower between members of the Trump campaign and Russians, though he called it ill-advised. Despite a promise of dirt on Clinton ahead of the meeting, there’s no evidence that such material was exchanged, he said.

The Senate Intelligence Committee, which is also investigating the Russian intervention, is expected to have a more bipartisan report out in the coming weeks dealing with election security. The Senate panel is expected to issue findings on the more controversial issue of coordination between the Trump campaign and Russia at a later date.

The Senate Judiciary Committee, also investigating the meddling, is expected to release transcripts soon of closed-door interviews with several people who attended the 2016 meeting between the Trump campaign and Russians. It’s unclear if the Judiciary panel will produce a final report.

The congressional investigations are completely separate from special counsel Robert Mueller’s criminal probe into Trump campaign ties to Russia and possible obstruction of justice, which is likely to take much longer. So far, Mueller has charged nearly 20 people as part of his investigation, including three Trump associates who have pleaded guilty.