US President Donald Trump's granddaughter Arabella Kushner played diplomat between China and US once again on Wednesday when she sang a song in Mandarin for Chinese President Xi Jinping and his wife Peng Liyuan in a video.

After watching the video, Xi praised Arabella for making progress with her Mandarin, and gave her an "A+." He added that Arabella has become a "little star" in China, and said he hopes she could visit China in the near future.

Arabella is not on her grandfather's 12-day Asia tour, but this is not the first time Arabella has sung for the Chinese president. She sang the popular Chinese folk song "Jasmine Flower" and recited Chinese poetry for Xi and Peng when the pair visited Mar-a-Lago in April.

The online feedback to Arabella's video in both China and the US has been overwhelmingly positive. "President Trump's granddaughter has played a bridging role in China-US diplomacy," Chinese netizens said. 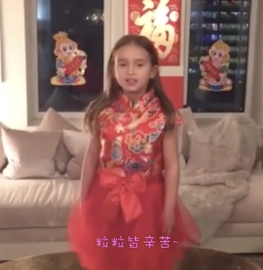 But Arabella's performance was only a tiny part of  the Chinese language learning fever in the US.

Chinese language courses are now available in primary and secondary schools in Washington DC and most US states, ranked as the fourth most widely taught foreign language in the country's education system, according to the National K-12 Foreign Language Enrollment Survey Report released earlier this year. 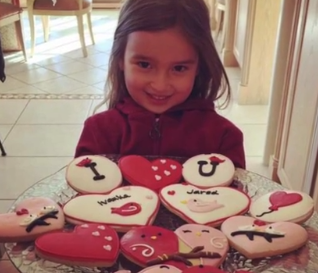 Figures from the China-US Strong Foundation, a non-profit US organization, show that the number of American K-12 students learning Mandarin has doubled to around 400,000 people in the past two years.

The organization has also initiated a Chinese language education initiative called "One Million Strong," which seeks to expand the number of US K-12 students learning Mandarin to a million by 2020. Such a bold goal was unimaginable five to 10 years ago.

Over the past decades, China's efforts to open up to the world has been accompanied by a national passion for learning English.

Simple:  because  of the rising international role China now plays. I have talked with many in the US who are now learning Chinese. Although their reasons for learning are diverse, they all agree that given China's current growing international influence, the ability to speak Chinese would be a plus for personal and professional growth.

The rapid expansion of private Chinese language schools, programs, as well as online programs and mobile phone apps are also providing Americans with greater access and convenience to learn the language.

With the Chinese language learning fever in the US, China-US relations will be closer and more dynamic in the future.