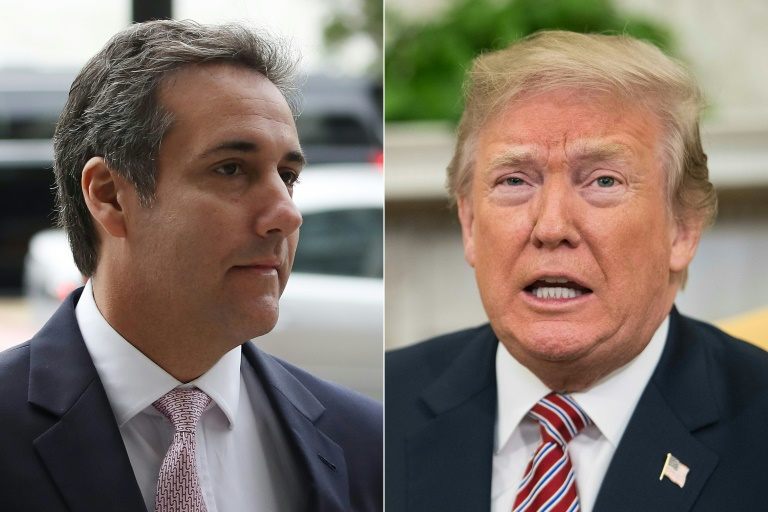 President Donald Trump has reacted furiously to an FBI raid on the home and office of his longtime personal lawyer Michael Cohen (Photo: AFP)

Michael Cohen has been under criminal investigation for months over his business dealings, and FBI agents last week raided his home, hotel room, office, a safety deposit box and seized two cellphones.

The US president reacted furiously, blasting the raid as a "witch hunt" and "an attack on our country," effectively opposing his own Justice Department and siding with his 51-year-old personal lawyer.

Cohen's legal team are requesting a temporary restraining order from a US federal judge in Manhattan that would prevent prosecutors from reviewing at least some of the material.

US federal Judge Kimba Wood has ordered Cohen to attend the hearing, scheduled for 2:00 pm (1800 GMT), in what will pit a powerful US attorney's office against lawyers for Cohen and the president.

A lawyer for Trump has asked Wood to allow her and the president to decide if any of the documents are protected by attorney-client privilege.

Joanna Hendon, Trump's lawyer, told an initial court hearing last Friday that the US president has an "acute interest" in the matter.

Woods must decide who should first read the seized material and whether any of it should be excluded from the case against Cohen.

It is not clear if she will rule Monday or release a written decision at a later date.

Setting the scene for more potential fireworks is Stormy Daniels' intention to attend the hearing, according to her lawyer.

Cohen, Trump's lawyer for years, has admitted paying Daniels $130,000 before the 2016 election. The president has denied any knowledge of the payment to secure Daniels' October 2016 signature on a hush agreement preventing her from talking about the liaison.

The Justice Department says Cohen is being investigated for criminal conduct "that largely centers on his personal business dealings."

Court papers filed by Robert Khuzami, the deputy US attorney in Manhattan, are redacted making it unclear the alleged criminal conduct for which the 51-year-old Cohen is being investigated.

The Justice Department has said last week's searches stemmed from "a months-long investigation" and seek evidence of crimes by Cohen, "many of which have nothing to do with his work as an attorney."

According to The Washington Post, Cohen may be under examination for possible bank fraud and for campaign finance violations.

The raid on Cohen's home and office came as special counsel Robert Mueller's probe intensifies its focus on the president's inner circle.

Mueller's team is examining possible collusion between Trump's 2016 election campaign team and Russia, as well as allegations of corrupt behavior by Trump campaign lieutenants and of White House efforts to obstruct the investigation.

So far, 19 people have been indicted, including the chairman of Trump's campaign and his former national security advisor.