HEADLINE Trump’s tariffs on China ‘will hurt US’

Trump’s tariffs on China ‘will hurt US’ 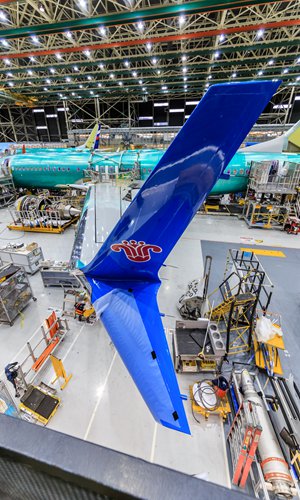 A plane procured by China Southern Airlines is being assembled at a Boeing plant in Seattle in December 2017 (Photo: Global Times)

A reported forthcoming move by the US to slap punitive tariffs on a wide range of Chinese goods has drawn a backlash in both China and the US and the move, aimed at punishing China for its intellectual property practices, will inflict serious damage to the US itself, Chinese experts said.Forty-five US industry associations have urged US President Donald Trump not to impose the tariffs, warning the move could be "harmful" to the US economy and consumers. In China, experts said that the country would take harsh countermeasures, including restrictions on various US imports such as soybeans and aircraft.The Trump administration is reportedly considering a series of measures, including tariffs on $60 billion worth of Chinese imports and investment restrictions, against China in response to findings from the so-called Section 301 investigation launched into China's intellectual property practices last year. The trade actions could be announced as early as this week, the Wall Street Journal reported on Sunday.In a joint letter to the White House, the US business groups, including the US Chamber of Commerce, the National Retail Federation and the Information Technology Industry Council (ITIC) and companies such as Apple Inc and Walmart Stores Inc, said that the move "would trigger a chain reaction of negative consequences for the US economy, provoking retaliation; stifling US agriculture, goods and services exports; and raising costs for businesses and consumers." The anxiety among US businesses highlights the fact that Trump's move will hurt not only China but also the US itself, according to Han Bing, an expert at the Institute of World Economics and Politics at the Chinese Academy of Social Sciences.

In a highly intertwined global supply chain, "the US' unilateral actions can't just target China as it intends and could be in violation of WTO rules," Han told the Global Times on Monday.

Though details of the potential tariffs are still unannounced, the damage to the US economy could be severe. In a report released on Friday, the Information Technology and Innovation Foundation estimates that a 10 percent tariff levied on Chinese information and communications products would slow the growth of US output by $163 billion over the next 10 years, and a 25 percent tariff would slow output by $332 billion. Thomas Donohue, president of the US Chamber of Commerce, said in a statement on Wednesday that tariffs of $30 billion a year would wipe out over one-third of the savings US households received from the doubling of the standard deduction in the recent tax reform, which has been hailed by Trump and US Republican lawmakers as a major legislative achievement. "Simply put, tariffs are damaging taxes on American consumers," Donohue said.Apart from these unintended damages, retaliation by the Chinese government would directly hurt the US economy, said Huo Jianguo, senior research fellow at the Center for China and Globalization.Huo, the former director of the Chinese Academy of International Trade and Economic Cooperation under the Ministry of Commerce (MOFCOM), said that the US move will "definitely" trigger a strong response from China and there are many ways China can "teach the US a lesson.""China can directly target US agricultural products, and that would already be worth more than $60 billion," Huo told the Global Times on Monday, adding that other products that China could target include Boeing aircraft and other technological products. "China should release a list of targeted US products like the EU did after Trump imposed tariffs on steel and aluminum," Huo said.Chinese officials have said little about potential countermeasures against the US, focusing primarily on warning of potential damage to both the Chinese and US economies as well as the global economy and issuing broad threats.In a press briefing on March 14, Lu Kang, spokesperson for the Foreign Ministry, said that "if the US takes measures that harm Chinese interests, the Chinese side would firmly defend its legal rights."China has already taken measures against some US agricultural products. On February 4, the MOFCOM launched an anti-dumping and anti-subsidy investigation into US sorghum. China imports 5 million to 6 million tons of sorghum from the US each year, according to Reuters.Huo noted that Chinese officials have not focused much on the US tariff issue because of the annual two sessions, which is set to end on Tuesday."After the key sessions, and with new officials installed in positions, there will be a plan to deal with the US," he said.