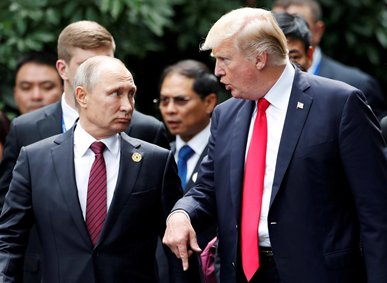 Washington (People's Daily) - US President Donald Trump congratulated Russian President Vladimir Putin Tuesday in a phone call on his victory in Sunday’s presidential election in Russia, according to the Kremlin and the White House. Trump said he intends to meet with Putin “in the not-too-distant future.”

The call came after the White House declared Monday that it is "not surprised by the outcome." The leaders also discussed arms control, Ukraine, Syria, and North Korea, the Kremlin said.

White House Press Secretary Sarah Sanders confirmed in a briefing that the two leaders discussed the state of bilateral relations and resolved to continue the dialogue about mutual national security priorities. They emphasized the importance of strategic stability and the denuclearizing of the Korean Peninsula, she added.

Sanders reiterated the US would maintain its longstanding position regarding Russia, including sanctions, and “will be tough when necessary.” Regarding the so-called upcoming meeting between the two presidents, Sanders said, “there aren’t specific plans made at this time, but we want to continue to have a dialogue with Russia.”

According to Sanders, Trump did not mention Russian meddling in the 2016 US elections, and the two leaders did not discuss the recent poisoning of Sergei Skripal, a former Russian spy in Salisbury, UK.