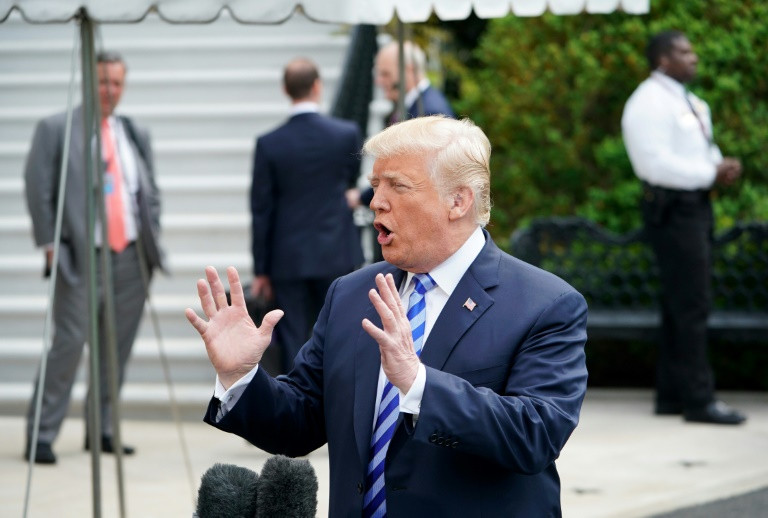 US President Donald Trump told reporters the date and venue of his summit with Kim Jong Un would be announced very soon.(Photo: AFP)

US President Donald Trump said Friday that a date and venue for his landmark summit with North Korea's Kim Jong Un would be unveiled soon, as he left open the prospect of future US troop reductions in the South.

"We now have a date and we have a location, we'll be announcing it soon," Trump told reporters as he left the White House on a trip to Texas.

Trump pushed back at suggestions he was envisaging a drawdown of troops in South Korea as part of negotiations with Kim's regime in the North Korea -- but he admitted it was a possibility in the longer term.

"Not really, not at this moment. Certainly not," Trump said when asked if troop reductions were on the table.

"I think a lot of great things will happen. But troops are not on the table. Absolutely."

The US president added, however: "Now I have to tell you, at some point into the future, I would like to save the money. You know, we have 32,000 troops there."

US National Security Advisor John Bolton earlier denied as "utter nonsense" a New York Times report saying Trump had asked the Pentagon for options to prepare for drawing down the 28,500-strong US force.

The Times report, which cited several unidentified officials briefed on the deliberations, said reduced troop levels were not intended to be a bargaining chip in Trump's upcoming summit with Kim.

But officials acknowledged that a peace treaty between the two Koreas could diminish the need for the US forces, The Times said.

Trump, who has hinted at imminent news about three Americans detained in North Korea, once more sounded an upbeat note regarding their fate.

"We're having very substantive talks with North Korea and a lot of things have already happened with respect to the hostages," he said.

"As I said yesterday, stay tuned," Trump added. "I think you will be seeing very, very good things."

The United States has been demanding the North Korea free Kim Hak-song, Kim Sang-duk and Kim Dong-chul and reports have said the two sides were close to reaching a deal on their release.