HEADLINE Trump says more must be done to protect children

Trump says more must be done to protect children 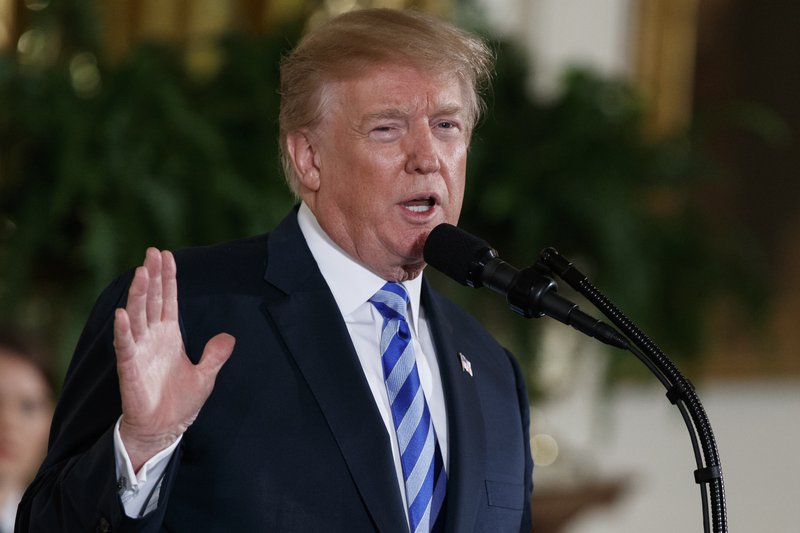 President Donald Trump planned to host students from the Florida high school reeling from a mass shooting Wednesday, as he seeks to show he is taking the highly charged issue of gun violence seriously.

The White House said students from Marjory Stoneman Douglas High School will come to the late afternoon “listening session,” along with people from groups representing Sandy Hook and Columbine survivors. The goal is an “open discussion on how we can keep our students safe.”

As the surviving students advocate for more action on guns, Trump wants to show that he has been swayed by the school shooting in Florida and was willing to listen to proposals. Still, Trump, a strong and vocal supporter of gun rights, has not endorsed more robust changes sought by gun control activists.

Television personality Geraldo Rivera dined with Trump at his private Palm Beach club over the weekend, describing him as “deeply affected” by his visit to see survivors. In an email, Rivera said he discussed the idea of raising the minimum age to purchase assault-type weapons with Trump.

“At our dinner at Mar-a-Lago I presented the Juvenile Assault Weapons Ban idea,” said Rivera. “He took it under advisement, and further suggested strongly that he was going to act to strengthen background checks.”

On Tuesday, Trump directed the Justice Department to move to ban devices like the rapid-fire bump stocks used in last year’s Las Vegas massacre. It was a small sign of movement on the gun violence issue that has long tied Washington in knots.

“We must do more to protect our children,” Trump said.

In a tweet Tuesday night, Trump indicated he wants to strengthen the background check system, but offered no specifics. Trump said: “Whether we are Republican or Democrat, we must now focus on strengthening Background Checks!”

Asked at a press briefing Tuesday if Trump was open to reinstating a ban on assault-type weapons, spokeswoman Sarah Huckabee Sanders said White House officials “haven’t closed the door on any front.” She also said that the idea of raising the age limit to buy an AR-15 was “on the table for us to discuss.”

Sen. Chris Murphy, a Connecticut Democrat and leading advocate for tighter gun controls, said Trump’s directive suggested the president was aware of fresh energy on the issue and called it a sign that “for the first time” politicians are “scared of the political consequences of inaction on guns.”

A bipartisan legislative effort to ban bump stocks last year fizzled out. The Bureau of Alcohol, Tobacco, Firearms and Explosives announced in December that it was reviewing whether weapons that use bump stocks should be considered illegal machine guns under federal law.

Under the Obama administration, the ATF had concluded that bump stocks did not violate federal law. But the acting director of the ATF told lawmakers in December that the ATF and Justice Department would not have initiated the review if a ban “wasn’t a possibility at the end.”

The Justice Department had not made any announcement regarding its review when Trump on Tuesday signed a memorandum directing the agency to complete the review as soon as possible and propose a rule “banning all devices that turn legal weapons into machine guns.”

Reacting to Trump’s memo, the department said in a statement that it “understands this is a priority for the president and has acted quickly to move through the rulemaking process. We look forward to the results of that process as soon as it is duly completed.”

A day earlier, Trump sent another signal he had been swayed by the Parkland shooting and the dramatic calls for action in its aftermath. A White House statement said Trump was looking at a bill that would strengthen federal gun background checks. On Wednesday, he will host parents, teachers and students at the White House for a “listening session” that will include people impacted by mass shootings in Parkland, Columbine, Colorado and Newtown, Connecticut.

The president was moved by a visit Friday with Florida victims in the hospital and is trying to work on solutions, said a person familiar with his thinking who sought anonymity to discuss internal conversations.

Among the steps sought by gun control advocates: closing loopholes that permit loose private sales on the internet and at gun shows, banning assault-type weapons and passing laws to enable family members, guardians or police to ask judges to strip gun rights temporarily from people who show warning signs of violence.

The Parkland shooting also has prompted the Republican-controlled Florida Legislature to take a fresh look at gun control legislation, although so far GOP leaders are refusing to endorse calls to ban assault rifles. Still, the discussion of some types of gun control legislation is a dramatic turnaround for Florida, which has earned the nickname the “Gunshine State” for its gun policies.

The federal background check bill was developed in response to a mass shooting last November in which a gunman slaughtered more than two dozen people at a Texas church. It would penalize federal agencies that don’t properly report required records and reward states that comply by providing them with federal grant preferences. The measure, which is pending in the Senate, was drafted after the Air Force acknowledged that it failed to report the Texas gunman’s domestic violence conviction to the National Criminal Information Center database.

The GOP-controlled House paired the background checks bill with a measure making it easier for gun owners to legally carry concealed weapons across state lines. The concealed carry measure, a top priority of the National Rifle Association, would allow gun owners with a state-issued concealed-carry permit to carry a handgun in any state that allows concealed weapons.