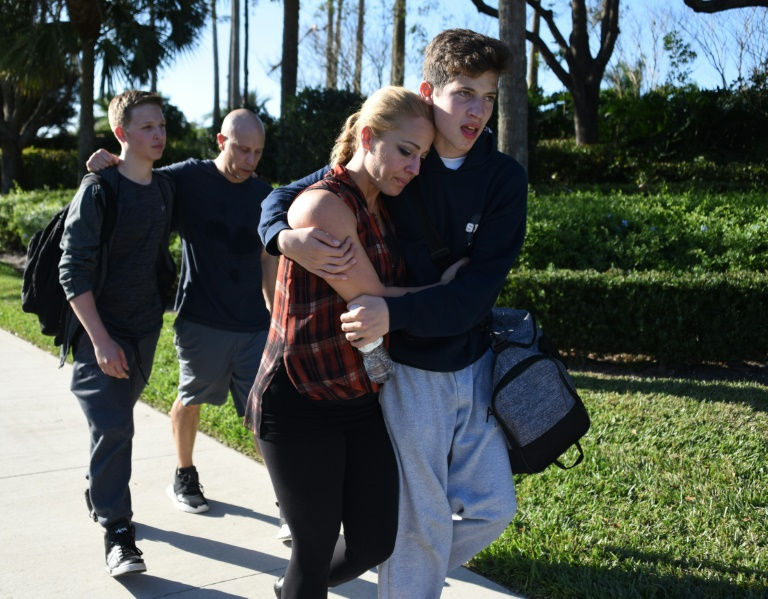 Students react following the latest deadly shooting at a US school in Parkland, Florida

President Donald Trump demanded to know Thursday how a "disturbed" former student with an obsession with firearms slipped through the net to sow carnage at a Florida high school, killing at least 17 people in the latest gun massacre to rock the nation.

After a night of questioning in police custody, the young man was reportedly transferred to a local Florida jail early on Thursday, with police to brief the media at 1515 GMT.

Trump ordered flags to fly at half-staff and was to deliver a televised address later Thursday, to a nation stunned by the mounting toll of school shootings which US authorities have so far appeared powerless to stop.

Wednesday's harrowing shooting spree saw terrified students hiding in closets and under desks as they texted for help, while the gunman stalked the school with a semi-automatic AR-15 rifle.

Fifteen people were killed at the school itself, and two later died in hospital. One of those killed was a football coach in Parkland, a city of about 30,000 people, located 50 miles (80 kilometers) north of Miami.

The president weighed in on the tragedy on Twitter by pointing to indications the shooter -- who had been expelled for disciplinary reasons -- was "mentally disturbed."

"So many signs that the Florida shooter was mentally disturbed, even expelled from school for bad and erratic behavior," Trump wrote.

"Neighbors and classmates knew he was a big problem. Must always report such instances to authorities, again and again!"

Cruz was reportedly known to have firearms at home and had talked about using them.

A teacher at the school said Cruz had been identified previously as a potential threat to his classmates. 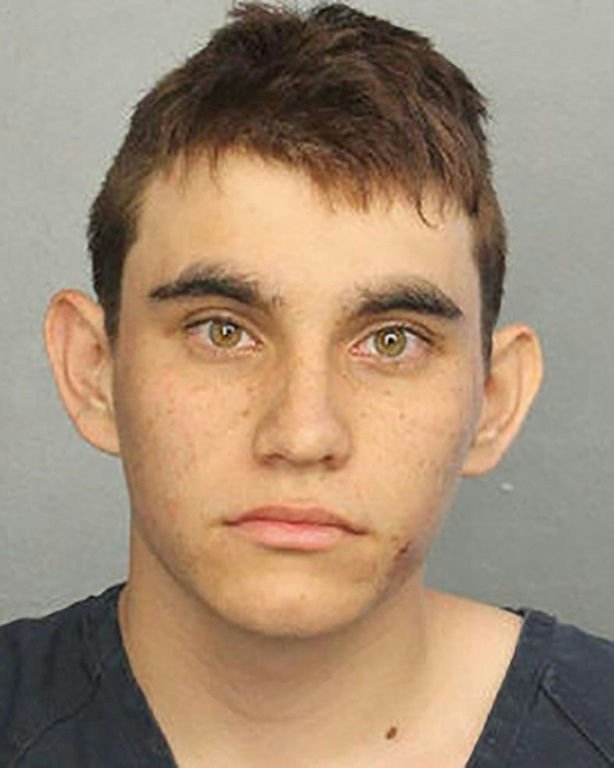 "We were told last year that he wasn't allowed on campus with a backpack on him," math teacher Jim Gard said in a Miami Herald interview.

"There were problems with him last year threatening students, and I guess he was asked to leave campus."

According to a BuzzFeed report, the FBI had been informed Cruz could carry out a school shooting last year, after the teen commented on a video: "I'm going to be a professional school shooter."

The creator of the video tipped off both the FBI and YouTube, BuzzFeed said.

Florida Senator Marco Rubio on Thursday called Cruz a "deeply disturbed person," and questioned how the teenager "escaped detection, was able to acquire this weapon, and then go on and kill 17 people and injure many more."

"This was someone that people knew was a danger," Rubio said.

The United States has been hit by almost 20 school shootings since the start of the year, a terrifying phenomenon that is part of a broader epidemic of gun violence in a country that loses 33,000 people to gun-related deaths each year.

While the latest mass shooting has inevitably reignited questions about America's permissive gun laws, Trump -- who is the first president to have addressed the NRA gun lobby -- is staunchly opposed to any additional gun control.

Opponents of gun control have consistently sought to steer public debate away from the issue, and onto the behavior and motives of people using the weapons.

When questioned at a press conference late Wednesday, Florida Governor Rick Scott -- who described the massacre as "just pure evil" -- declined to make a statement on gun control.

"There's a time to continue to have these conversations about how through law enforcement, how through mental illness funding that we make sure people are safe, and we'll continue to do that," said Scott, a Republican.

Cruz had mixed in with students fleeing the school before being caught, officials said.

"We have already begun to dissect his websites and things on social media that he was on and some of the things... are very, very disturbing," Broward County Sheriff Scott Israel said.

"If a person is predisposed to commit such a horrific event by going to a school and shooting people ... there's not anybody or not a lot law enforcement can do about it."

"This is a terrible day for Parkland," Israel said.

The FBI said it was assisting local law enforcement with the investigation.

Parkland Mayor Christine Hunschofsky said a police officer was always stationed at the school and there was a "single point of entry."

Since January 2013, there have been at least 291 school shootings across the country -- an average of about one a week, according to Everytown for Gun Safety, a non-profit group that advocates for gun control.

"It is pretty clear that we're failing our kids here," said Melissa Falkowski, a teacher who squeezed 19 students into a closet to shield them from harm.