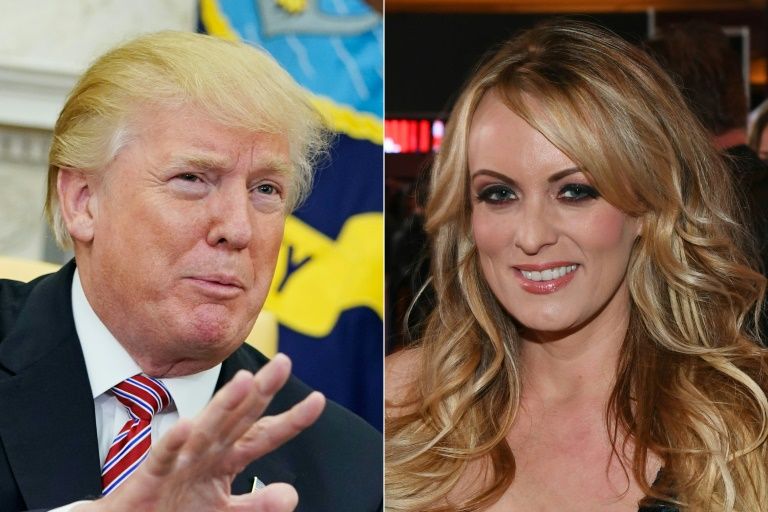 In its first response to a primetime interview watched by more than 21 million Americans, the White House questioned Daniels' credibility and challenged her to present proof.

Trump has never spoken publicly about the allegations and has repeatedly ignored questions from reporters about the issue, which has dogged the White House for months.

On Monday morning Trump tweeted cryptically: "So much Fake News. Never been more voluminous or more inaccurate. But through it all, our country is doing great!"

The CBS interview on Sunday night brought the 39-year-old's long-simmering allegations of sex, hush money and intimidation to a national audience directly for the first time.

Daniels alleged the pair had unprotected sex after meeting at a celebrity golf tournament in Lake Tahoe in July 2006 – shortly after Trump's wife Melania gave birth to their son.

Daniels told Anderson Cooper on CBS' "60 Minutes" that five years later she was approached by a man in a Las Vegas parking lot and warned to keep silent, after she had agreed to sell her story for $15,000.

Her lawyer, Michael Avenatti, told MSNBC on Monday that his client is receiving "threats on a near-hourly basis" and that "she's certainly scared for her safety and the safety of her family."

Trump's lawyer Michael Cohen has admitted paying Daniels $130,000 shortly before the 2016 election, but has not explained why.

"The president doesn't believe any of the claims Ms Daniels made in the interview last night were accurate," Shah said, while admitting Trump may not have watched it all.

"There's nothing to collaborate her claim," Shah added, going a step further and accusing her of changing her story.

"The only person who's been inconsistent is the one making the claims," he said, citing documents she signed denying the affair.

Daniels, whose real name is Stephanie Clifford, has acknowledged she signed a non-disclosure agreement, with a potentially ruinous fine of $1 million every time she speaks about the alleged tryst.

She is challenging the validity of the agreement in court.

Such contracts, while legal, have frequently been used by powerful men to hush up affairs, workplace harassment or even alleged sexual abuse.