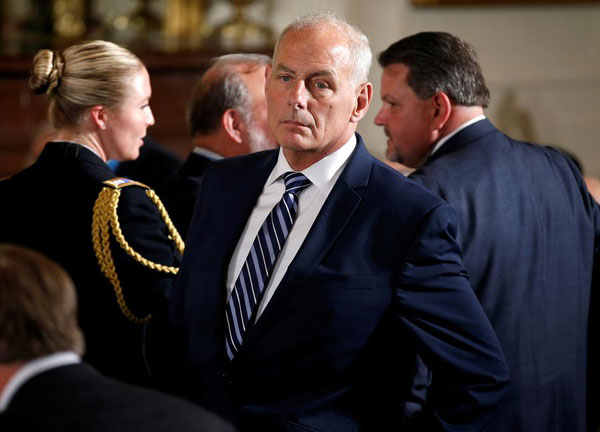 White House Chief of Staff John Kelly stands before a Medal of Honor ceremony in the East Room of the White House in Washington, US, July 31, 2017. (Photo: Xinhua)

White House advisers on Sunday tried to quash speculation that President Donald Trump may seek to replace Chief of Staff John Kelly over his handling of domestic abuse accusations against an aide who resigned last week.

Senior Trump adviser Kellyanne Conway said the president asked her to make clear he supports Kelly, who has come under intense scrutiny since the allegations against White House staff secretary Rob Porter surfaced.

Porter resigned on Wednesday after two former wives said he abused them. His abrupt departure raised questions about how long it took Trump’s team to act on the accusations.

“He has full confidence in his current chief of staff, General John Kelly and he’s not actively searching for replacements,” Conway said on ABC’s “This Week.”

Two days after Porter stepped down, White House speechwriter David Sorensen resigned amid his ex-wife’s allegations of domestic violence. Both men have denied the accusations.

The scandals follow months of allegations by women of sexual harassment or abuse at the hands of powerful men in entertainment, business and politics.

Kelly has so far taken the brunt of the blame for the handling of Porter’s case, and a source familiar with the matter told Reuters he had offered to resign.

White House aides on Sunday television news shows stressed that Kelly was not in any danger of being ousted from his post.

Trump’s legislative liaison Marc Short denied that Kelly had offered to resign and said he was doing an outstanding job.

Budget director Mick Mulvaney blamed talk of a Kelly ouster on people disgruntled because they lost access to the Republican president after Kelly became chief of staff in July during a White House shakeup.

“I think that talk about the chief’s departure is much ado about nothing,” he said on “Fox News Sunday.”

Jeh Johnson, a homeland security secretary during the Obama administration and a friend of Kelly, said the White House would be worse off without Kelly.

“I think as long as Donald Trump is president, our government is best served if John Kelly is in the job of chief of staff,” he told CNN’s “State of the Union.”