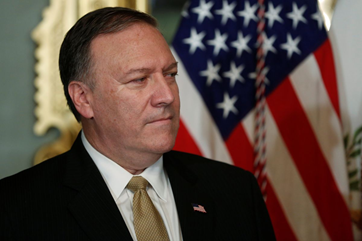 Washington (People’s Daily) - US President Donald Trump announced he would replace Rex W. Tillerson with Mike Pompeo, CIA director and former industrialist, as new Secretary of State, according to the Washington Post.

A senior administration official indicated the step was taken to have a team in place ahead of the impending talks with North Korea’s leader Kim Jong-Un, in May. The president wanted a change of direction also for various ongoing trade-discussions reasons.

President Trump hailed Pompeo as the person who “has earned the praise of members in both parties by strengthening our intelligence gathering, modernizing our defensive and offensive capabilities, and building close ties with our friends and allies in the international intelligence community.” He tweeted Pompeo will do a fantastic job.

“I have gotten to know Mike very well over the past 14 months, and I am confident he is the right person for the job at this critical juncture,” the president affirmed in a written statement. “He will continue our program of restoring America’s standing in the world, strengthening our alliances, confronting our adversaries, and seeking the denuclearization of the Korean Peninsula,” Trump added.

In August 2017, Pompeo took direct command of the Counterintelligence Mission Center, the department that helped launch an investigation into possible links between Trump associates and Russian officials.

Pompeo is viewed as hawkish. Russia Today said the switch is a major shake-up of Trump's cabinet. Compared to Tillerson who has taken an ambivalent approach towards North Korea, it continued, Pompeo seems to have embarked on a more hardline stance.

According to Al Jazeera News, Pompeo was criticized in 2013 by Muslim communities for asserting their silence on violence committed by "extremists" was "deafening."

In 1986, Pompeo graduated first in his class from the US Military Academy at West Point where he majored in mechanical engineering. Later, he served with distinction in the US Army, and graduated with honors from Harvard Law School.

Pompeo, a former Tea Party congressman, is perceived as a Trump loyalist who swayed the president with his persuasive style through copious intelligence briefings. He has been serving as CIA Director since January 23, 2017, and has founded an aviation parts firm and an oilfield supply company.