Trump to meet with video game makers after Florida shooting 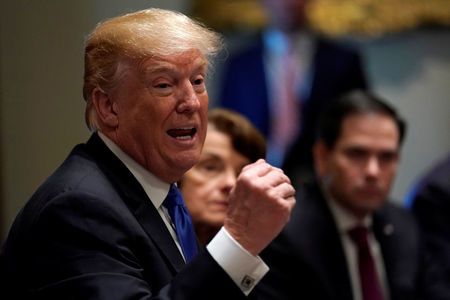 U.S. President Donald Trump meets with bi-partisan members of Congress to discuss school and community safety in the wake of the Florida school shootings at the White House in Washington, U.S., February 28, 2018.(Photo:  Reuters)

U.S. President Donald Trump will meet on Thursday with the makers of “Grand Theft Auto” and “Doom” to discuss what the president believes is a link between video games and violent acts like last month’s school shooting in Florida.

It is the latest in a series of free-wheeling sessions Trump has held to talk about how to stop mass shootings at schools, but the White House has not yet made clear the full range of actions Trump supports to address gun violence.

Thursday’s session, set for 2 p.m. ET (1900 GMT), will include executives from Take-Two Interactive Software Inc, which owns “Grand Theft Auto,” and ZeniMax Media Inc, owner of “Doom.” Trump’s younger brother Robert Trump is on the board of ZeniMax, first reported by Bloomberg.

Trump, a Republican, has talked about the need to examine how violence in media affects children, after a 19-year-old gunman was accused of killing 17 people at a high school in Parkland, Florida and injuring more than a dozen others.

Trump has made the issue personal, taking the unusual step of mentioning his concern for his 11-year-old son, Barron. “I look at some of the things he’s watching, and I say, how is that possible?” he said last week.

Dan Hewitt, a spokesman for the Entertainment Software Association, a lobby group whose CEO will attend the White House meeting, said studies have established no connection between video games and violent conduct.

“Video games are plainly not the issue: entertainment is distributed and consumed globally, but the U.S. has an exponentially higher level of gun violence than any other nation,” Hewitt said in a statement.

Other association members include some of the biggest names in the industry such as Electronic Arts Inc, Activision Blizzard Inc, Nintendo Co Ltd, Sony Corp and Tencent Holdings Ltd.

The meeting will also include conservative groups and lawmakers.

Zenimax and Take-Two were also part of a White House discussion on the same issue five years ago after a shooting at a Newtown, Connecticut elementary school left 26 dead.

Afterward, then-President Barack Obama, a Democrat, pressed for Congress to give the Centers for Disease Control $10 million to research the causes of gun violence, including the role played by video games.

Trump is considering support for a range of legislative options, including toughening up background checks for gun buyers.

His administration is also working to block the use of bump stocks accessories that enable semiautomatic rifles to fire hundreds of rounds a minute.