HEADLINE Trump tweets denuclearization of Korean peninsula 'not a small possibility', but sanctions will be maintained

Trump tweets denuclearization of Korean peninsula 'not a small possibility', but sanctions will be maintained

US President Donald Trump tweeted on Wednesday that he "looked forward" to meeting with Kim Jong-un but meanwhile "maximum sanctions and pressure" on the Democratic People's Republic of Korea (DPRK) will be maintained.

"For years and through many administrations, everyone said that peace and the denuclearization of the Korean Peninsula was not even a small possibility. Now there is a good chance that Kim Jong-un will do what is right for his people and for humanity. Look forward to our meeting!" he wrote on his Twitter account. 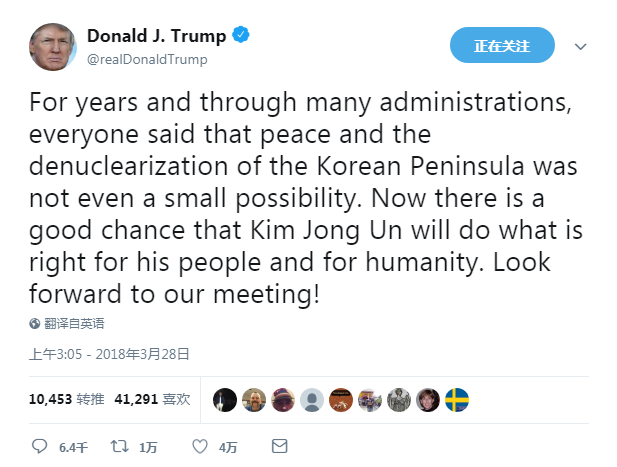 In a following post, he paradoxically added, "In the meantime, and unfortunately, maximum sanctions and pressure must be maintained at all cost!" 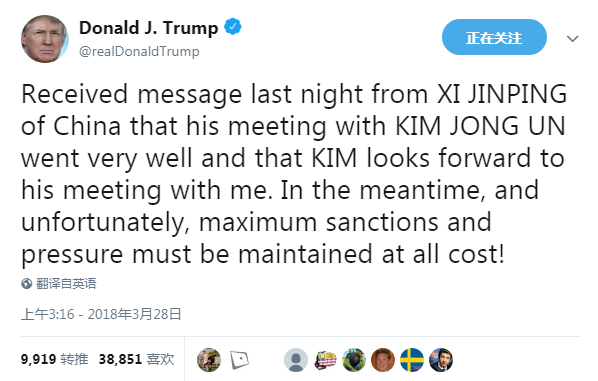 His comments came after Kim paid an unofficial visit to China from March 25 to 28, before DPRK's planned summits with US and South Korea. 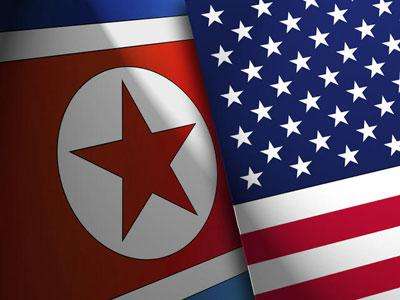 At the invitation of DPRK, Trump will meet Kim in May, reports said. The upcoming meeting has aroused wide speculation on the situation of the Korean Peninsula and how the denuclearization will be realized.