A "huge" trade deficit with China is reportedly behind the US administration's plan to slap tariffs on up to 60 billion US dollars of Chinese imports and restrict Chinese investment.

But data sometimes lies, and could shield the bigger picture.

What the United States claims to be a "record trade deficit" with China is an inflated figure.

According to US Census Bureau data, the trade deficit with China ran to a record 375 billion US dollars last year, while China's customs data showed the country's surplus with the United States stood at 1.87 trillion yuan (about 298 billion US dollars).

The gap resulted mainly from differences in statistical approaches, such as whether or not to include transit trade in the calculations, according to Zhang Monan, researcher with China Center for International Economic Exchanges.

Such discrepancies have inflated the US calculation of its trade deficit with China by about 20 percent every year, according to Minister of Commerce Zhong Shan.

The United States is home to many multinational companies that have a global supply chain, but the current total value statistical method has distorted reality, analysts said. 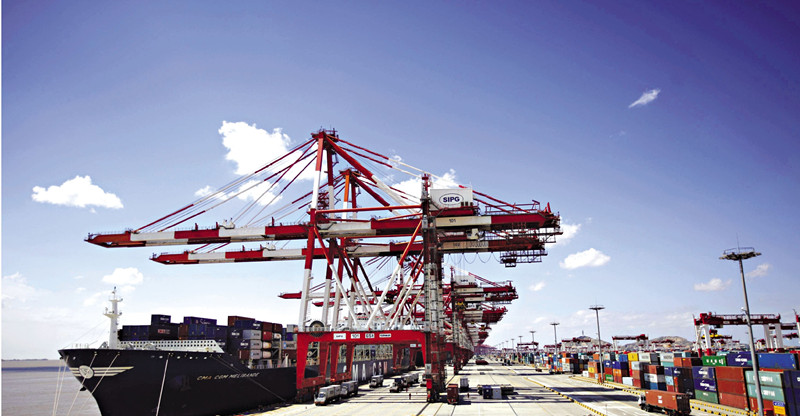 An iPhone, for example, uses components made in different countries around the world and is only assembled and manufactured in China, but the calculation of trade statistics attributed most of the value to China.

"In this case, China is taking the blame for others," Zhang said.

She added that most of the profits actually went to U.S. companies but the value of the products was reflected in Chinese exports, resulting in inaccurate statistics.

What's more, when talking about the deficit with China, the United States always played down trade of services, according to Tu Xinquan, professor at the University of International Business and Economics.

Data from China's Ministry of Commerce showed that the country has a service trade deficit with the United States, and the gap has been widening.

Statistical differences aside, the fact that the United States is not only running a trade deficit with China, but many other countries means the root cause of the imbalance is the US economic structure, which features low savings and high consumption.

In the past decades, US businesses transferred their manufacturing bases to countries with cheap labor and low costs, which helped drive up their profits and benefited consumers.

In a world whose prosperity has been built on the free flow of trade and investment, price-sensitive consumers largely decided the directions of trade, either for exports or imports.

"China has been a major market where the United States enjoyed its fastest export growth, and an important cause of the trade imbalance is the fact that many US goods are less competitive in the Chinese market," said Long Guoqiang, deputy director of the Development Research Center of the State Council.

Solutions to the US-China trade deficit do not come from cutting imports from China, but from US enterprises making their products more competitive, he said.

"I believe people should not confuse the lack of competitiveness with unfair trade. If companies lack competitiveness, they need to invest in innovation and people development in order to catch up," he told reporters at the China Development Forum in Beijing.

As China has repeatedly stressed, the trade imbalance between the two countries is mainly a result of different economic structures, industrial competitiveness, and international division of labor, and China has never sought a trade surplus as the flow of trade is determined by the market.

Unwavering in opening up

When handling economic ties with other countries, a trade surplus is not what China seeks. Faced with setbacks in economic globalization and free trade, China has continued to be unwavering in opening up its economy.

Take the opening up of the service sector for example. Even though China holds a big service trade deficit with the United States, it has been taking big steps to further open the sector, and more measures are in the pipeline.

Vice Minister of Commerce Wang Shouwen said on Sunday that China will widen market access in finance, telecom, heath care, education, and elderly care for foreign investors, and will ease restrictions on foreign holdings in financial businesses including banks, brokerages, and funds.

"We will unveil timetables and roadmaps to open up sectors including finance, new energy vehicles, and gas stations," Wang said while addressing the China Development Forum in Beijing.

"We have as always supported free, fair trade," he said.

China has also cut red tape in foreign investment with many approval procedures simplified or scrapped, and more favorable policies can be expected, according to the vice minister.