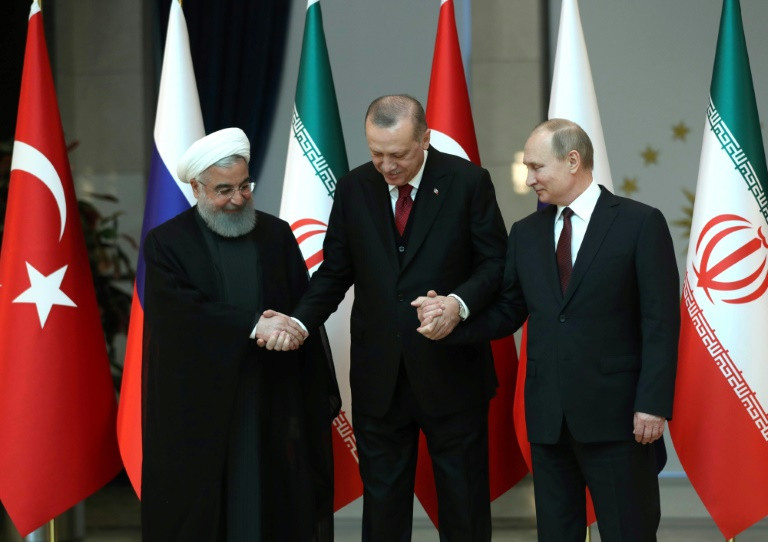 Turkey, Russia and Iran on Wednesday said they were committed to achieving a "lasting ceasefire" in Syria, in a joint statement issued following a summit in Ankara hosted by Turkish President Recep Tayyip Erdogan.

Erdogan, Iranian President Hassan Rouhani and Russia's Vladimir Putin reaffirmed their commitment to cooperating for "the achievement of a lasting ceasefire between the conflicting parties", a joint communique said.

The three powers have been working together to speed up the process of finding a political solution in Syria as part of the Astana peace process which began last year.

The Ankara summit at Erdogan's presidential palace was the second such tripartite summit following one in November 2017 in the Black Sea resort of Sochi hosted by Putin.

Erdogan insisted their meetings and the Astana talks were not an "alternative" to the UN-backed Geneva process to find peace in Syria.

But the three leaders said "the Astana format had been the only effective international initiative that had helped reduce violence across Syria and had contributed to peace and stability in" the country.

They added that it had given "impetus to the Geneva process in order to find a lasting political solution to the Syrian conflict" in the statement.

"What is foremost for us is getting results. We must get results. We have no tolerance for delays. People are dying here," Erdogan told reporters after the summit.

The three countries have been working together despite being on opposing sides of the civil war.

Russia and Iran have provided military and political support to the regime of Syrian President Bashar al-Assad while Turkey has repeatedly called for his removal and helped Syrian opposition fighters.

Turkey last month drove out Kurdish militia from Afrin city after launching a cross-border offensive in the Syrian region in January, thanks to a reported green light from Moscow which controls airspace in northern Syria.

The next three way summit will take place in Tehran, Erdogan said, but he did not indicate when that would be.

Some 350,000 people have been killed since the start of the conflict following anti-government protests in March 2011. Millions more have been forced to flee their homes.

Turkey hosts over 3.5 million Syrian refugees, most of whom live in Turkish cities.