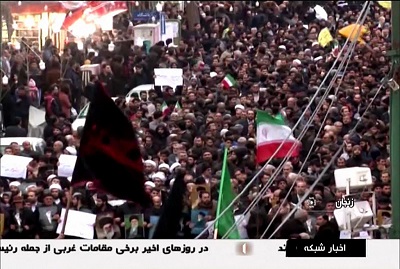 An image grab taken from a broadcast by Islamic Republic of Iran Broadcasting (IRIB) on January 1, 2018, shows Iranians chanting slogans as they march in support of the government in the northwestern city of Zanjan. (Photo: VCG)

ANKARA, Jan. 2 (Xinhua) -- Turkey's Foreign Ministry on Tuesday expressed concern over violent protests in Iran and warned against escalation.Ankara is worried about "reports that the demonstrations that started on December 28 in Iran have spread and people were killed during the incidents," the ministry said in a written statement.The Turkish ministry underlined that Turkey "attaches great importance to the protection of friendly and brotherly Iran's social peace and stability.""In this context, we believe that taking into account the statement by President Rohani that the people have the right for peaceful demonstration, but that the law should not be violated, public property should not be harmed and one should avoid provocations and violence," the ministry stated.Turkey "wishes that the peace in the country will be ensured as soon as possible, the common sense will be dominated to prevent the escalation of the events, and that the provocative rhetoric and external interventions will be avoided," the ministry added.