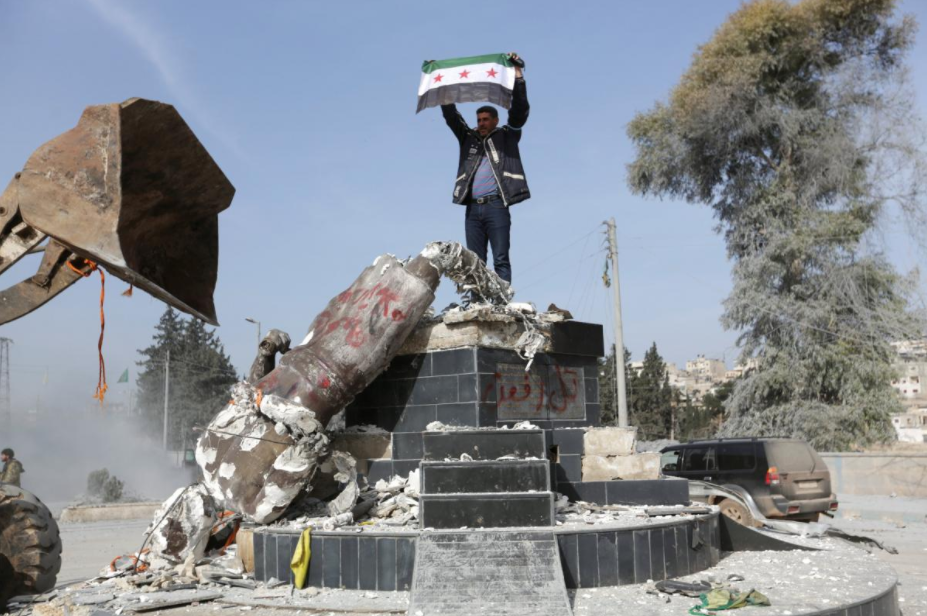 Turkish-backed Free Syrian Army member holds a flag as they pull down Kurdish statue in the center of Afrin, Syria March 18, 2018. (Photo: Reuters)

Turkish forces and their Syrian rebel allies swept into the northwestern Syrian town of Afrin on Sunday, raising their flags in the town center and declaring full control after an eight-week campaign to drive out Kurdish YPG forces.

A spokesman for the rebel fighters said they entered Afrin before dawn, meeting no resistance. A war monitor, the Syrian Observatory for Human Rights, said pockets of YPG fighters defied orders to withdraw, but Turkish forces were in control.

The fight for Afrin, a once-stable pocket of northwest Syria, has opened a new front in Syria’s multi-sided civil war and highlighted the ever-greater role of foreign powers such as Turkey in the seven-year-old conflict.

Ankara says Syrian Kurdish YPG fighters are an extension of a militant group waging an insurgency inside Turkey, and vowed to crush what it described as a “terror corridor” of YPG-controlled territory along Turkey’s southern border with Syria.

It has threatened to extend the Afrin offensive to another Kurdish-controlled region further east where US forces are stationed alongside the YPG, Washington’s ally against Islamic State in Syria.

“Afrin city center is under control as of 8:30 this morning,” Turkish President Tayyip Erdogan told a rally commemorating the World War One Gallipoli campaign, adding that Turkish and Free Syrian Army flags had been raised in the town center.

“Most of the terrorists have already fled with tails between their legs. Our special forces and members of the Free Syrian Army are cleaning the remains and the traps they left behind,” Erdogan said. “In the center of Afrin, symbols of trust and stability are waving instead of rags of terrorists.”

An official from the local Kurdish authority raised the prospect of a guerrilla campaign against Turkey, saying Kurdish forces were still present across the Afrin region and would “strike the positions of the Turkish enemy and its mercenaries at every opportunity.”

“Our forces all over Afrin will become a constant nightmare for them,” Othman Sheikh Issa, co-chair of the Afrin executive council, said in a televised statement.

A Whatsapp group run by the Kurdish-dominated Syrian Democratic Forces said Turkish and Syrian rebel troops tore down a statue in Afrin, in what it called a “blatant violation of Kurdish people’s culture and history”.

In Turkey, dozens of pro-Kurdish and leftist groups appealed to world powers to press for the Turkish and Syrian rebel forces to withdraw from Afrin and avoid a “human tragedy”.

Free Syrian Army spokesman Mohammad al-Hamadeen said the fighters entered the town from the north, east and west. Kurdish forces had pulled back to Syrian government-controlled areas around the city of Aleppo, or to the Kurdish-held region east of the Euphrates river, he said.

“Maybe (Afrin) will be cleared by the end of the day — it’s empty of fighters, they cleared out,” Hamadeen told Reuters.

Turkey’s armed forces said that troops were combing the streets for mines and improvised explosive devices.

Government spokesman Bekir Bozdag said the military campaign would continue to secure areas around Afrin and make sure food and medicine were available.

The World Food Programme said it was distributing food to 25,000 people in the nearby towns of Nubl and Zahra, including people just arriving from Afrin.