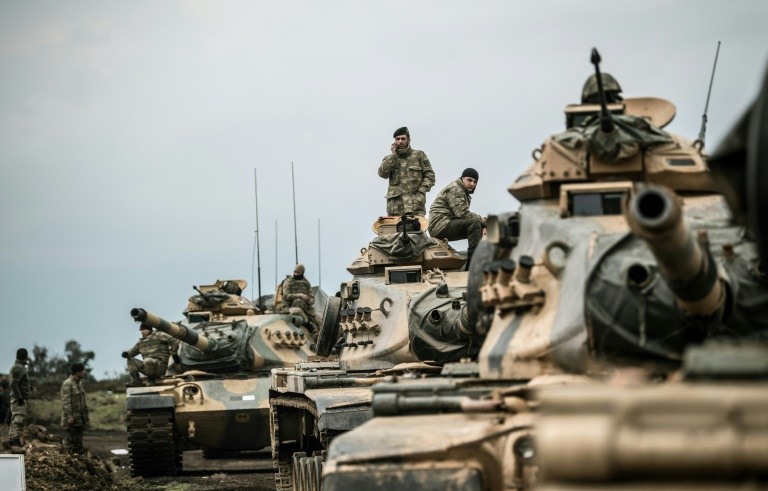 Turkish troops and tanks entered Syria on Sunday to push an offensive against Kurdish militia as France warned over the risks of the operation and rockets hit border towns in apparent retaliation.

But the campaign risks further increasing tensions with Turkey's NATO ally the United States -- which has supported the YPG in the fight against Islamic State (IS) jihadists -- and also needs at least the tacit support of Russia to succeed.

France's defence minister said it risked harming the campaign to crush IS, as Paris called for an urgent UN Security Council meeting to discuss the fighting.

Thirty-two Turkish planes destroyed a total of 45 targets including ammunition dumps and refuges used by the YPG on the second day of the operation, the Turkish army said.

An AFP photographer saw Turkish tanks lined up at the border waiting to cross into Syrian territory.

But a YPG spokesman claimed Turkish forces seeking to enter Afrin had been "blocked" and that it had hit two Turkish tanks.

The Britain-based Syrian Observatory for Human Rights said a total of 18 civilians had been killed so far in the two-day operation. Ankara denied any civilian casualties, with Cavusoglu accusing the YPG of sending out "nonsense propaganda and baseless lies".

In his first comments on the offensive since it began, President Recep Tayyip Erdogan expressed hope the "operation will be finished in a very short time" and vowed "we will not take a step back".

Following calls from some Turkish pro-Kurdish politicians for people to take to the streets, he warned that anyone protesting in Turkey against the operation would pay "a heavy price".

In a sign of the risks to Turkey, six rockets fired from Syria hit the Turkish border town of Reyhanli Sunday, killing one Syrian refugee and wounding 32 people, its mayor said.

The operation is Turkey's second major incursion into Syria during the seven-year civil war after the August 2016-March 2017 Euphrates Shield campaign in an area to the east of Afrin, against both the YPG and IS.

Turkey accuses the YPG of being the Syrian offshoot of the Kurdistan Workers' Party (PKK) which has waged a rebellion in Turkey for more than three decades and is regarded as a terror group by Ankara and the EU and US.

Afrin is an enclave of YPG control, cut off from the longer strip of northern Syria that the group controls to the east, extending to the Iraqi border which has a US military presence.

Turkish Deputy Prime Minister Bekir Bozdag ruled out the risk of a clash with American forces, saying they were not present in the Afrin region.

Yildirim was quoted as saying that the Turkish forces aimed to create a security zone some 30 kilometres (18 miles) deep inside Syria.

Turkey risks entering a diplomatic minefield with its action in Syria and the foreign ministry said it had informed Damascus through its Istanbul consulate.

But the Syrian regime, which is at odds with Turkey, strongly denied this and President Bashar al-Assad slammed the offensive as "support for terrorism".

There was no immediate comment from the United States on the offensive but ahead of its launch a senior State Department official had raised concerns it risked harming regional security.

French Defence Minister Florence Parly said the fighting "must stop" as it could deter YPG fighters helping the international coalition against IS.

Foreign Minister Jean-Yves Le Drian said France was calling the UN Security Council meeting as it was deeply worried by the "brutal degradation of the situation" in flashpoints like Afrin.

Crucial is the attitude of Russia, which has a military presence in the area and is also working with Turkey on a drive to end the civil war.

The Russian foreign ministry voiced concern and urged Turkey to show restraint, while the defence ministry said its troops were withdrawing from the Afrin area to ensure their security and prevent any "provocation".