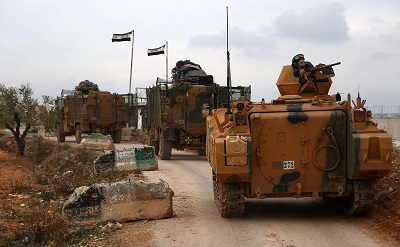 Turkish troops and tanks entered Syria on Sunday to push an offensive against Kurdish militia as rockets hit border towns in apparent retaliation and the United States urged Ankara to show restraint.

But the campaign risks further increasing tensions with Turkey's NATO ally Washington, which has supported the YPG in the fight against Islamic State (IS) jihadists and warned Ankara about distracting the focus from that fight.

In its first reaction to the offensive, the US State Department urged Turkey Sunday "to exercise restraint and ensure that its military operations remain limited in scope and duration and scrupulous to avoid civilian casualties".

Thirty-two Turkish planes destroyed a total of 45 targets including ammunition dumps and refuges used by the YPG on the second day of the operation, the Turkish army said.

A photographer saw more Turkish tanks lined up at the border waiting to cross into Syrian territory.

But a YPG spokesman claimed Turkish forces seeking to enter Afrin had been "blocked" and that it had hit two Turkish tanks.

The Britain-based Syrian Observatory for Human Rights said a total of 18 civilians had been killed so far in the two-day operation, including eight members of the same family sheltering in a building that was flattened by an airstrike.

But Ankara denied any civilian casualties, with Cavusoglu accusing the YPG of sending out "nonsense propaganda and baseless lies".

Top: Turkish armoured personnel carriers (APCs) and infantry fighting vehicles (IFVs) are seen driving near the village of Yazi Bagh, about six kilometres from the Bab al-Salamah border crossing between Syria and Turkey in the north of Aleppo province, on January 21, 2018, with the flags of the Syrian opposition seen flying in the background. (Photo: VCG)