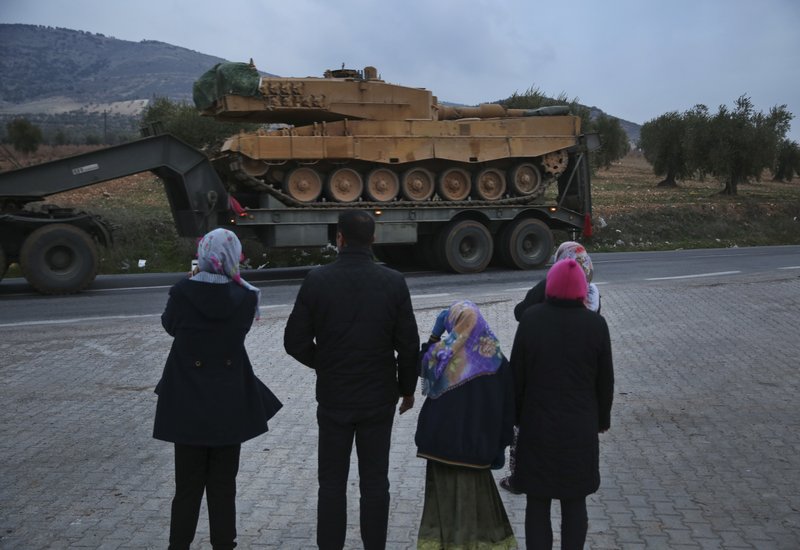 Intense clashes erupted Monday as Turkish troops and their allies advanced on a Kurdish enclave in Syria, the third day of the Ankara offensive aimed at ousting the US-backed Kurdish militia from the area, the militia and a war monitoring group said.

The Turkish offensive on Afrin, codenamed Operation Olive Branch, started on Saturday, heightening tensions in the already complicated Syrian conflict and threatening to further strain ties between NATO allies Turkey and the United States. Turkey says it aims to create a 30-kilometer (20-mile) deep “secure zone” in Afrin, the Kurdish-controlled enclave that straddles its borders.

The U.N. Security Council was to convene later Monday to discuss the situation in Syria.

A NATO statement Monday said it has been in touch with Turkey over the developing offensive. NATO said Turkey has suffered from terrorism and has the right to self-defense but urged Ankara to do so in a “proportionate and measured way.”

NATO also said it has no presence in Syria but that as members of the coalition against Islamic State militants, “our focus is on the defeat” of the extremist group.

The Kurdish group, the People’s Defense Units or the YPG, said the Turkey-backed forces have opened a new front, pushing their way into two other villages in the district’s north. The militia said it is fighting to push back the advancing troops in Balia and Qarna in northwest Afrin.

Associated Press journalists at Hassa, a Turkish village on the Turkey-Syrian border, saw at least eight tanks and five armored vehicles along with trucks preparing to cross into Syria.

The Britain-based Syrian Observatory for Human Rights, which monitors the war in Syria, said the Syrian Kurdish militia waged a ferocious counteroffensive late Sunday, repelling the Turkish troops and allied Syrian fighters from the two villages they briefly captured. The Observatory said Turkey-backed troops were attempting once again to enter Afrin.

Access to Afrin is restricted and it is difficult to independently verify the reported developments.

Turkey considers the YPG a terror organization because of its affiliation to its own Kurdish insurgency. The militia formed the backbone of the Syrian Democratic Forces, US’ ally in the war against the Islamic State militants in Syria.

The US has urged Turkey to exercise restraint and ensure that its military offensive into Afrin is limited in scope and duration.

But Turkish President Recep Tayyip Erdogan has promised to expand the operation, threatening to go to Manjib to the east, which the U.S-backed Kurdish fighters had liberated of Islamic State militants in 2016 and currently administer.

The Kurdish militia has meanwhile blamed Russia for the Afrin attack, saying Russian officials have urged them to hand over the enclave to the Syrian government to avoid the Turkish offensive. Russian troops stationed in Afrin district had redeployed ahead of the Turkish offensive, which also includes airstrikes. At least 18 civilians have been killed in Afrin so far, according to the Observatory. One Syrian refugee was killed in a Turkish border town following rockets launched from Syria.

Dmitry Peskov, spokesman for Russian President Vladimir Putin, told reporters Monday that Moscow is “carefully watching the operation” in Afrin” and is in touch with both the Syrian and the Turkish government.

Meanwhile, Turkey’s Interior Ministry announced the detention of 24 people for alleged terror propaganda on social media regarding the Olive Branch operation, according to the country’s official Anadolu news agency.

Erdogan warned Kurds in Turkey on Sunday against taking to the streets to protest Turkey’s military operation against Afrin. Police already broke up protests in Ankara and Istanbul on Sunday, detaining at least 12 demonstrators in Istanbul who were protesting the offensive. Police used tear gas to disperse a separate protest in the capital Ankara. It did not provide further details on the Ankara protests.