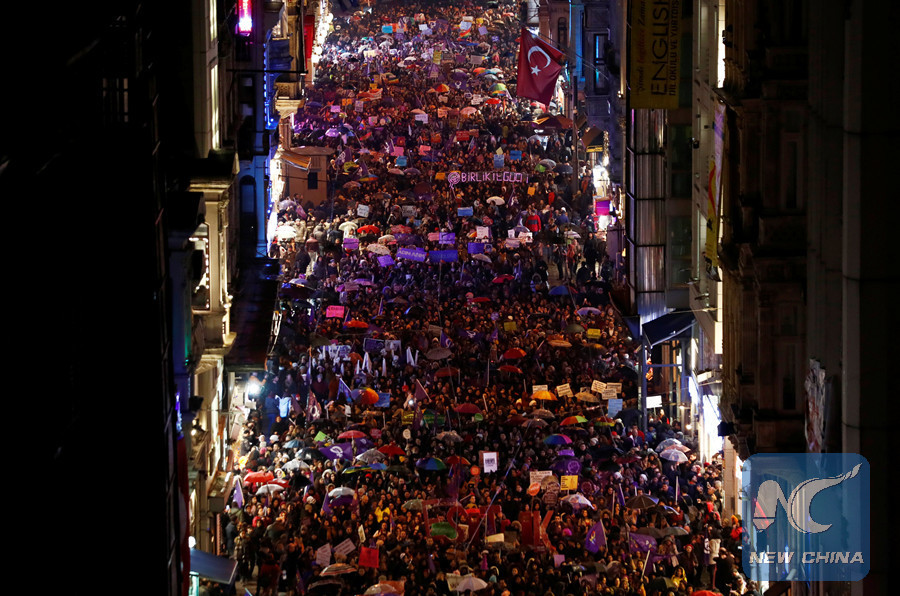 Activists march at the main shopping and pedestrian street of Istiklal during a rally on the International Women's Day in Istanbul, Turkey March 8, 2018. (Photo: Reuters)

ISTANBUL, March 8 (Xinhua) -- More than 2,000 women on Thursday staged a parade in central Istanbul to show a united stance against growing violence and sexual abuses by men to mark the International Women's Day.

The women from all age groups gathered on the city's bustling Istiklal Avenue, which is packed with tourists, shops, coffeehouses and bars, for a night march despite pouring rain.

They carried banners reading "Another world is possible!" "We defend our lives!" and "Stop femicide," shouting slogans denouncing violence and homicide against women.

"Our lives are under threat, men see in themselves the right to mess with even our makeup, we are struggling against unemployment, we are subject to sexual harassment in parks, on buses," lamented Didem Dogan, a young woman.

"We have to get united and raise our voices together," she told Xinhua.

A total of 409 women were killed by men in 2017, up from 328 in 2016, while 387 children were sexually abused and 332 women were subject to sexual violence, according to figures released by We Will Stop Femicide Platform, a women rights group that tracks the number of homicides against women.

The group said that 33 percent of murders of women remained unsolved last year while the rest were executed mostly by their husbands and close relatives.

The latest data show that in February alone, 47 women were murdered by men across Turkey, against 28 in the same month in 2017.

"The night belongs to us, the streets belong to us," said Idil Ozturk, a young woman who was shouting and whistling with the crowd.

"I want to shout out from here and say, 'Women are not alone,'" she said.