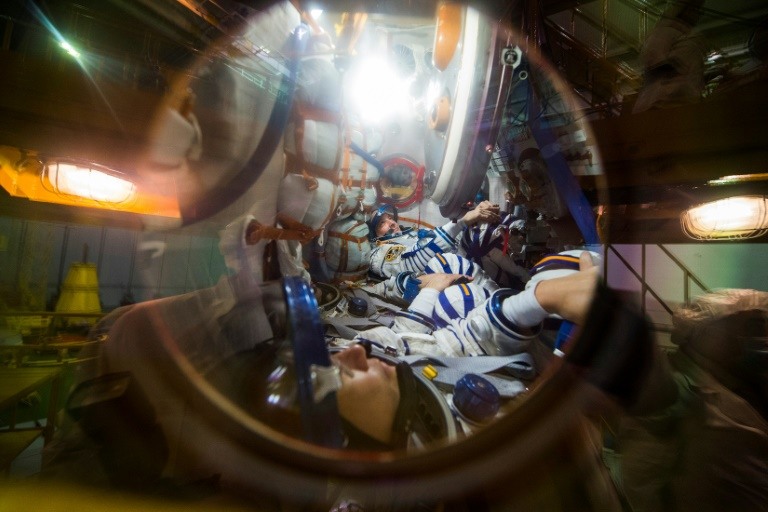 Anton Shkaplerov of Roscosmos and Norishige Kanai of the Japan Aerospace Exploration Agency will blast off from Kazakhstan's Baikonur cosmodrome to replace the returning astronauts and cosmonaut. Photo: AFP

Two astronauts, from the US and Italy, and a Russian cosmonaut on Thursday landed in Kazakhstan after almost five months on the International Space Station, footage from the Russian space agency showed.

Over 139 days in space the three men "have supported hundreds of experiments in biology, biotechnology, physical science and Earth science aboard humanity’s only microgravity laboratory," NASA said in an earlier statement.

Bresnik took part in several spacewalks to fix a robotic arm that latches onto incoming spaceships packed with supplies, while all three men were involved in a live video chat with Pope Francis from the space station.

On Sunday Scott Tingle of NASA, Anton Shkaplerov of Roscosmos and Norishige Kanai of the Japan Aerospace Exploration Agency will blast off from Kazakhstan's Baikonur cosmodrome to replace the returning astronauts and cosmonaut.

The space travelers will join three other crew members currently on the ISS.

In October Russia's space agency said a manned Soyuz rocket had suffered a partial loss of pressure as it returned to Earth from the ISS in April this year.

The incident did not put the lives of the crew in danger, Roscosmos said, but it was the latest in the string of glitches to hit the country's space programme, which this month extended to a failed satellite launch.

NASA stopped its own manned launches to the ISS in 2011 but recently moved to increase its crew complement aboard the ISS as the Russians cut theirs in a cost-saving measure announced last year.

The ISS laboratory, a rare example of American and Russian international cooperation, has been orbiting Earth at about 28,000 kilometres per hour (17,000 miles per hour) since 1998.