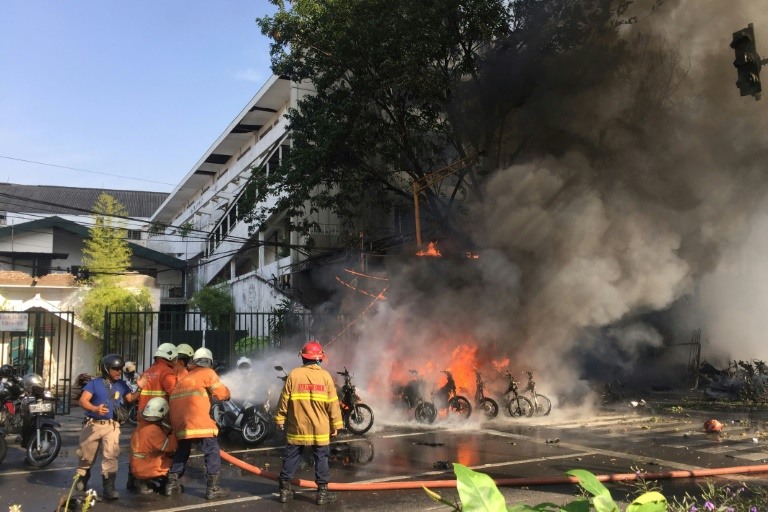 The spate of bombings has rocked Indonesia, with the Islamic State group claiming the church attacks and raising fears about its influence in Southeast Asia (Photo: AFP)

A family of five, including a child, carried out the suicide bombing of a police headquarters in Indonesia's second city Surabaya on Monday, police said, a day after a deadly wave of attacks on churches staged by another family.

The spate of bombings has rocked Indonesia, with the Islamic State group claiming the church attacks and raising fears about its influence in Southeast Asia as its dreams of a Middle Eastern caliphate fade.

Indonesia, which is set to host the Asian Games in just three months, has long struggled with Islamist militancy, including the 2002 Bali bombings that killed over 200 people -- mostly foreign tourists -- in the country's worst-ever terror attack.

Security forces have arrested hundreds of militants during a sustained crackdown that smashed some networks, and most recent attacks have been low-level and targeted domestic security forces.

But that changed Sunday as a family of six -- including girls aged nine and 12 -- staged suicide bombings of three churches during morning services in Surabaya, killing 18 including the bombers.

On Monday members of another family blew themselves up at a police station in the city, wounding 10.

"There were five people on two motorbikes. One of them was a little kid," national police chief Tito Karnavian said. "This is one family."

An eight-year-old girl from the family survived the attack and was taken to hospital, while her mother, father and two brothers died in the blast, he said.

The children were likely led to their deaths without a full awareness of their fate, said Ade Banani, of the University of Indonesia’s research centre of police science and terrorism studies.

If a family believed in traditional roles, the father "has the power, so everyone has to obey", Banani said.

The father of the church suicide bombers was a local leader in extremist network Jamaah Ansharut Daulah (JAD) which supports IS, and the second family was also linked to JAD.

"It ordered and gave instructions for its cells to make a move," Karnavian said of the Islamic State's role in the church attacks.

He added that the bombings may have also been motivated by the arrest of JAD leaders, including jailed radical Aman Abdurrahman, and were linked to a deadly prison riot staged by Islamist prisoners at a high-security jail near Jakarta last week.

Abdurrahman has been connected to several deadly incidents, including a 2016 gun and suicide attack in the capital Jakarta that left four attackers and four civilians dead.

Despite their apparent allegiance to IS, the church-bombing family were not returnees from Syria, police said Monday, correcting their earlier statements.

However, hundreds of Indonesians have flocked in recent years to fight alongside IS there.

Its ambitions have been reined in after losing most of the land it once occupied in Iraq and Syria, and there are concerns that jihadists will now turn their focus on establishing a base in Southeast Asia.

On Sunday evening, just hours after the church bombings, a further three people in another family were killed and two wounded when another bomb exploded at an apartment complex about 30 kilometres (20 miles) from Surabaya.

That explosion appeared to have been an accidental detonation that killed a mother and her 17-year-old child who was not identified.

The woman's husband -- a confidante of the husband behind the church bombings, Dita Oepriyanto -- was badly injured in the explosion.

Police said they arrived after the explosion and shot dead the injured man, Anton Febrianto, as he held a bomb detonator in his hand.

"When we searched the flat we found pipe bombs, similar to pipe bombs we found near the churches," said Karnavian.

Police said they also shot dead four suspects,including the second-ranking member of the JAD cell in Surabaya, in raids on houses and offices Monday while nine others were arrested.

Indonesian police have foiled numerous terror plots, but the coordinated nature of Sunday's church bombings and the subsequent blasts point to more sophisticated planning than in the past, analysts said.

"To pull off three near-simultaneous bombings is the hallmark of a group that is thinking."

Abuza questioned the police suggestion that the attacks were ordered by the IS leadership abroad, but said it would likely boost its presence in Southeast Asia as it fades elsewhere.

"(They're) going to continue to benefit from operating transnationally in Southeast Asia," he said.