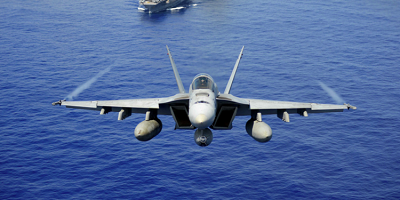 An F-18 jet of the U.S. Navy crashed Wednesday afternoon near Key West in the U.S. state of Florida, killing two crew members on board, the Navy said.

"We are sad to report that both aviators have been declared deceased," the U.S. Naval Air Forces said on social media, adding that the relatives of the dead were being notified.

Both crew members ejected before the crash. They had been transferred to Lower Keys Medical Center in Key West before the declaration of their death, said Naval Air Forces Atlantic spokesman Dave Hecht.

The jet, assigned to Strike Fighter Squadron 213 from the state of Virginia, experienced a mishap as it approached the Boca Chica Field in the area of Chica Key, the authorities said.

According to witness accounts, the aircraft erupted into fire before "dropping from the sky." Photos taken at the site show the aircraft crashed upside down into shallow waters. It remains unknown whether the crew landed on land or in water.

The cause of the incident is still under investigation.

The F-18 Hornet is a twin-engine supersonic, all-weather carrier-capable multirole combat jet that went into service in the 1980s.