The two Koreas have put aside their differences during the 2018 Winter Olympics, but the situation may not continue after the end of the games, U.S. experts have said.

The past year has seen an escalating war of words between U.S. President Donald Trump and the top leader of the Democratic People's Republic of Korea (DPRK) Kim Jong Un, as Washington tries to pressure Kim into abandoning Pyongyang's nuclear weapons programs. 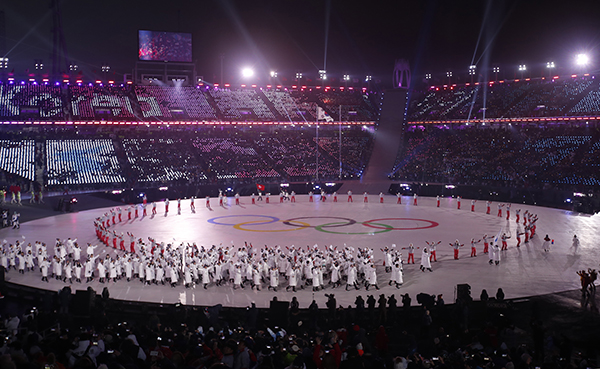 Kim has threatened several times to hit the United States with nuclear weapons, while Trump said any provocations from Pyongyang will be met with a "fire and fury" such as the world has never seen.

Recent weeks have seen that harsh rhetoric quiet down, as Pyongyang focused on its role in the Winter Olympics, and there have been many examples of goodwill and brotherhood between the two Koreas. Those include the fielding of a joint women's hockey teams at the games.

But it remains unknown whether this detente on the Korean Peninsula will extend beyond the Olympics, as Pyongyang is likely to continue its ballistic missile tests while the United States and South Korea plan to hold joint military exercises after the Olympics.

"Everyone knows that after the Olympics, there will be renewed military exercises by ROK (South Korea) and U.S. forces in the South. The North usually portrays such exercises as 'provocative,' and will probably try to get them reduced or redirected," Douglas Paal, vice president for studies at the Carnegie Endowment for International Peace, told Xinhua.

"This could renew tensions on the peninsula. The U.S. will also want to grimly pursue application of the UN sanctions once the Olympics are over," he said.

Paal added that South Korean President Moon Jae-in would intend to  maintain the goodwill, but he will be wary. Former President Roh Moo-hyun whom Moon had served had a troubled state visit to Pyongyang and difficult relations with Washington.

"So far, he is doing well to avoid both downsides, keeping Washington on his side as he explores reducing tensions on the basis of addressing the underlying security challenges," Paal said.

Troy Stangarone, senior director with the Washington-based Korea Economic Institute, told Xinhua: "If this pause (in tensions) lasts beyond the Olympics, we'll likely see the rhetoric on all sides tamped down, with Pyongyang largely not commenting on the upcoming U.S.-South Korea military exercises after the Olympics and all of the sides exploring whether a dialogue is possible."

"This could potentially also include a summit meeting between President Moon and Kim Jong Un. The Olympics have created an opportunity for something more, but not a guarantee. It's up to all of the parties to see if they can find a way to build on the current pause to find a more lasting solution," Stangarone said.

President Moon has been a proponent of engagement with the DPRK, analysts said.

Stangarone said he thinks Moon's goal has been to utilize the Olympics to break the cycle of escalating tensions and create a platform for better relations with Pyongyang, including between the DPRK and the United States.

"The challenge is that now that we have a temporary pause, how do you continue to build on that rather than have all of the parties go back to their respective positions once the Olympics are over," Stangarone said.