The image of a rural child who arrived at school with icicles frozen into his hair after walking along a twisting mountain road has become a major talking point at the biggest political gathering of the year in China, as delegates seek to improve educational opportunities in the countryside. 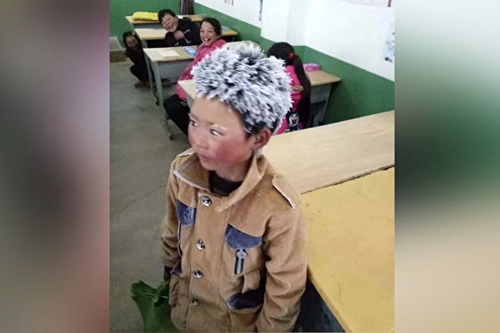 The 10-year-old Wang Fuman from Yunnan Province was dubbed “Snowflake Boy,” and became a symbol of children left behind in the countryside under the care of their grandparents or other relatives as their parents move to cities to find work.

The image on the freezing boy was impressive because it represents the current conditions of rural education in China.

Many “left-behind” children have to travel long distances to go to schools. They face high tuition fees. Boarding schools have hidden potential risks: including badly equipped dormitories, poor sanitary conditions, and a lack of support from teachers to help with students’ daily life. These and other factors can lead to poor psychological health and low academic performance for the students.

According to statistics from the Ministry of Civil Affairs, Ministry of Education and Ministry of Public Security, there are around 9.02 million so-called left-behind children in China’s rural areas. Lacking sustained love and attention from their parents, some children develop discipline problems and poor learning habits. Sometimes their safety cannot be guaranteed due to poor guardianship.

To deal with this problem, a series of policies have been introduced at both national and local levels in recent years.

However, the policies are not enough.  The central government made the educational goal of “building a fair and high-quality education” system part of its Report on the Work of the Government for the year 2018, and as a result topics related to educational equality and educational quality development have led to heated discussions among delegates.

Yu Minhong, a member of the Chinese People's Political Consultative Conference and chairman of Beijing New Oriental Education Technology Group, said, “I come from a rural family. And I am so worried when seeing rural kids and migrant children do have not enough access to educational opportunities.”

Yu paid a visit to a migrant children’s school on the outskirts of Beijing last winter. There were about 500 students in the school. Most of their parents work in the delivery industry, agriculture and nursing, Yu said.

“The children usually have two choices: One is to go back to their hometown and stay away from their parents. The other is to attend a migrant children’s school in the metropolises where their parents work. However, the schools barely have standard dormitories or a good learning environment. Besides, the tuition fee means a lot for their families,” said Yu.

Yu suggested that urban and rural schools form partnerships to help close the gap in education. Within the system a key school in a central city and a small school in rural areas can be encouraged to form pairs to share good-quality educational resources.

Cutting-edge technologies such as online classrooms and distance education with two teachers in one class are also good ways to deal with the current lack of excellent teaching staff [in the countryside], he added.

Can these ongoing efforts from all parties make the conditions that led to “Snowflake Boy” become history? Hopefully yes. But don’t forget: To achieve educational equality, implementing proposals effectively is the key.