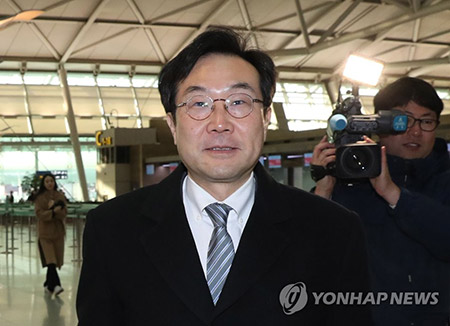 The U.S. State Department Monday said its special envoy for the Democratic People's Republic of Korea (DPRK) will visit Japan and South Korea from Feb. 1-6.

Joseph Yun, special representative for DPRK policy and deputy assistant secretary for Korea and Japan, will meet with senior government officials in Tokyo and Seoul to discuss coordination on the DPRK and other alliances and bilateral issues, it said in a statement.

In Tokyo, Yun will participate in the International Colloquium on Building Stable Peace in Northeast Asia organized by the Toda Peace Institute, the Norwegian Institute of International Affairs, and the National Center for Peace and Conflict Studies University of Otago.

Despite tension easing on the Korean Peninsula with the DPRK agreeing to take part in the 2018 Winter Olympics to be held in South Korea, Washington has vowed to maintain its "maximum pressure" campaign against Pyongyang, slapping new sanctions on Jan. 24.

It has also launched a string of international events to engage other nations in the campaign.

Secretary of State Rex Tillerson met with his Danish counterpart Anders Samuelsen Monday and noted Denmark's support for the United States in the campaign.

"They bring a lot to our discussions in terms of considering alternative means to engage in difficult problems" like Pyongyang, Tillerson said.