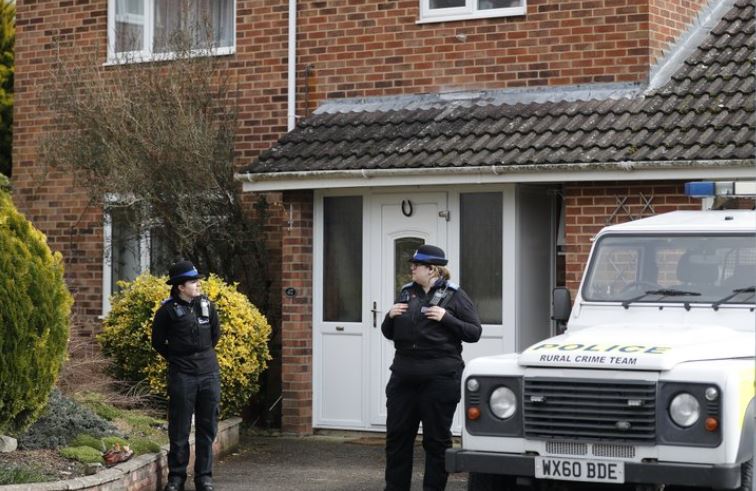 In this Tuesday, March 6, 2018 file photo, police officers stand outside the house of former Russian double agent Sergei Skripal in Salisbury, England. British police say they believe a Russian ex-spy and his daughter first came into contact with a military-grade nerve agent at their front door. Deputy Assistant Commissioner Dean Haydon says in a statement Wednesday, March 28 police are now focusing their investigation in and around Sergei Skripal’s home. (Photo: AP)

The Latest on the poisoning of a Russian ex-spy in Britain (all times local):

British police say they believe a Russian ex-spy and his daughter first came into contact with a military-grade nerve agent at their front door.

Deputy Assistant Commissioner Dean Haydon says in a statement Wednesday police are now focusing their investigation in and around Sergei Skripal’s home.

London’s Metropolitan Police say they have “identified the highest concentration of the nerve agent, to-date, as being on the front door of the address.”

The revelation is significant because it’s the first time police have offered any suggestion about where the Skripals were poisoned. Police have also searched a variety of sites around Salisbury, including a pub, a restaurant and a cemetery.

Britain blames Russia for the poisoning, triggering a diplomatic dispute between Moscow and Western countries. Moscow vehemently denies any involvement.

President Donald Trump has spoken with British Prime Minister Theresa May about the coordinated effort by Western allies to expel Russian intelligence operatives.

That’s according to the White House, which says the leaders agreed Wednesday that dismantling Russian spy rings is a priority to “curtail Russian clandestine activities and prevent future chemical weapons attacks on either country’s soil.”

More than 150 Russian envoys have been expelled so far. The moves came weeks after Russia allegedly poisoned a former spy and his daughter on British soil with a nerve agent on March 4.

The White House says Trump and May also discussed the recent passage of a law designed to make it easier for US and foreign law enforcement officials to share access to electronic data stored overseas.

Russia’s envoy to the top trans-Atlantic security and rights group says the expulsions of Russian diplomats over the poisoning of an ex-spy in Britain have set a bad precedent.

Alexander Lukashevich, the Russian envoy at the Organization for Security and Cooperation in Europe, said the expulsion of more than 150 Russian diplomats by more than 20 nations created “a dangerous precedent of a collective punishment of a nation whose guilt hasn’t been proven.”

Britain has accused Russia of a nerve agent attack on ex-spy Sergei Skripal and his daughter. Russia has fiercely rejected the accusations, calling them unfounded.

Deputy Foreign Minister Sergei Ryabkov told the RIA Novosti news agency Wednesday that Russia is “thoughtfully and thoroughly” considering its response to the expulsion of more than 150 Russian diplomats by more than 20 nations in a show of solidarity with Britain.

Britain has accused Russia of a nerve agent attack on ex-spy Sergei Skripal and his daughter. Russia has fiercely rejected the accusations, calling them baseless.

Ryabkov told Interfax that the expulsions were directed by London and Washington, adding that other nations succumbed to their pressure. He added that “all options are on the table” regarding Russia’s response.

Malta has decided to recall its ambassador to Russia over the nerve agent attack on a former spy in Britain.

Initially, Malta held off on recalling Ambassador Carmel Brincat for consultations. A government spokesman said doing so would have effectively terminated diplomatic relations, given the small size of Malta’s embassy in Moscow.

But on Wednesday, the foreign ministry announced it was recalling Brincat and was standing “in full solidarity with the United Kingdom in the face of this serious challenge to our common security.”

In a statement, the government said it agrees with Britain’s assessment that it is “highly likely that the Russian Federation is responsible” for the poisoning.

The niece of Sergei Skripal, the Russian ex-spy poisoned in Britain along with his daughter, has said her uncle and cousin have only a slim chance of surviving.

Viktoria Skripal told the BBC: “Out of 99 percent I have maybe 1 percent of hope. Whatever it was has given them a very small chance of survival.”

The former spy and his daughter Yulia, who were found slumped on a bench in Salisbury on March 4, remain in critical condition after they were poisoned by a nerve agent. Britain blames Russia for the attack, but Moscow denies responsibility.

Viktoria Skripal also said that her uncle’s mother had not been told of the incident. “The first priority was to protect our granny so that she wouldn’t hear or find out anything,” she said.

Slovakia’s foreign minister says the government has decided to recall its ambassador to Moscow for consultations over the nerve agent attack on a former spy in Britain.

But Miroslav Lajcak says after a meeting of the country’s Security Council that the government is not yet ready to join two dozen other countries in expelling Russian diplomats over the incident.

Although Lajcak calls Slovakia’s move “a serious diplomatic step,” the British ambassador to Bratislava, Andrew Garth, is not impressed.

Garth has told the Slovak public television and tweeted that the seriousness of the attack “requires a firm response.”

The ambassador adds that “I acknowledge the decision. But cannot say I am not disappointed.”

Germany is rejecting suggestions it was premature to expel four Russian diplomats over the attack on an ex-spy in Britain.

Opposition lawmakers have criticized the government for joining other European countries and the United States in ordering the Russian embassy officials to leave the country.

Foreign Ministry spokesman Rainer Breul said Russia had made no effort to cooperative constructively in the British investigation.

Breul said Wednesday there was “no other plausible explanation” than that Russia was behind the attack and expelling four diplomats deemed to have intelligence ties was “measured and appropriate.”

Government spokesman Steffen Seibert said “the investigations that have already happened in Great Britain are of a very high standard and the decision by European Union member states was taken after intensive European contacts and intensive explanations by the British government.”

NATO-member Turkey this week condemned the poisoning of a former Russian spy in Britain and called for the perpetrators to be brought to justice.

The government said however that it had no plans to follow NATO and EU allies in ousting Russian diplomats.

Erdogan reportedly told journalists: “Just because some countries took a step based on an allegation, we don’t have to (decide to) take the same step.” His comments were published in Hurriyet and other newspapers on Wednesday.

Britain has accused Russia of being behind nerve agent attack on former double agent Sergei Skripal and his daughter. More than 20 nations have expelled over 130 Russian diplomats this week in a show of solidarity.

Turkey has cultivated closer ties with Moscow as its relations with western allies have deteriorated. Ankara and Moscow are also working together to try and end the Syrian conflict.

Montenegro has decided to expel a Russian diplomat from the tiny Adriatic state which joined NATO against Moscow’s wishes.

The Montenegro government said Wednesday it has informed the Russian embassy in Podgorica of the measure and gave the unidentified diplomat seven days to leave the country.

With the move, Montenegro, which is not yet an EU member, joined a wave of countries and groups expelling Russian diplomats over the nerve-agent attack on a former spy in Britain.

Montenegro government says it has taken the decision “in coordination with our allies.”

A former close Russian ally, Montenegro has accused the Kremlin of being behind an alleged coup attempt in October 2016 because of its NATO bid. Moscow has vehemently denied involvement.

The Russian Foreign Ministry says British special services could have been behind the poisoning of a former Russian spy in Britain.

Britain has accused Russia of a nerve agent attack on former double agent Sergei Skripal and his daughter. Russia has fiercely rejected the accusations, calling them baseless.

More than 20 nations have expelled over 130 Russian diplomats this week in a show of solidarity with Britain. Russia denounced the actions as “boorish” and pledged to retaliate.

Moscow said the British failure to provide evidence suggests the poisoning was a “major political provocation.”

The Kremlin says it will respond soon to the recent expulsions of more than 130 Russian diplomats from Western nations.

Monday’s mass expulsions by the United States, European Union nations and some other countries were a show of solidarity for Britain, which blames Russia for poisoning a former Russian intelligence agent in Britain with a military-grade nerve agent. Moscow vehemently denies responsibility.

Asked if Russia is going to react to the expulsions, Kremlin spokesman Dmitry Peskov told reporters on Wednesday that Russia’s response will follow an that that it will be “timely and will suit the interests of Russia.”

Russia is observing a nationwide day of mourning on Wednesday for the victims of a shopping mall fire in Siberia.