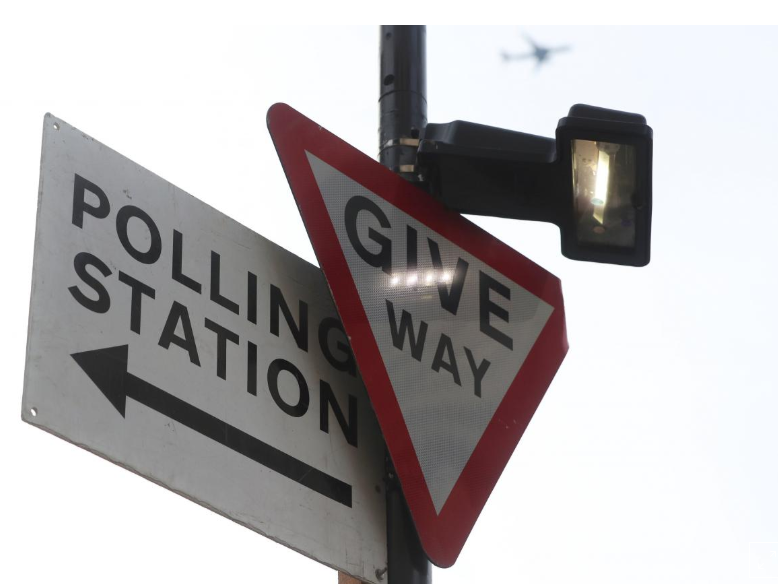 A polling station sign is attached to a lamp post in central London, Britain May 3, 2018. (Photo: Reuters)

Voters in England cast their ballots on Thursday in local government elections expected to show rising support for Prime Minister Theresa May’s opponents in London and add to questions about her ability to follow through on her Brexit plan.

The election results, due to start being declared in the early hours of Friday morning, will be viewed as a gauge of public support for May as she faces a possible revolt over her strategy for leaving the European Union.

A poor set of results is unlikely to spark internal calls for her resignation, but could weaken her authority over a Conservative party deeply divided about the right approach to Brexit ahead of several key parliamentary tests of unity on future customs arrangements with the EU.

Thursday’s vote will decide more than 4,400 council seats, determining the makeup of 150 local government authorities who are responsible for the day-to-day provision of public services. They do not affect seats in parliament, where May has only a slim working majority thanks to a deal with a smaller party.

The headline-grabbing results in the capital, where over 40 percent of the seats are being contested, are forecast to see a swing toward the opposition Labour Party, reinvigorated under socialist Jeremy Corbyn and fighting a campaign focused on the effects of eight years of Conservative-led spending cuts.

A Survation poll on Wednesday in London showed Labour 20 percentage points ahead of the Conservatives.

Both May and Corbyn were pictured casting their ballots early on Thursday morning.

In final online campaign videos, May said her party was delivering local services whilst keeping taxes low. Corbyn’s said the government had failed schools and hospitals, and had not tackled a housing crisis.

May’s party could lose control of some of the eight London boroughs it currently runs out of 32 in total. This would reflect both weariness over cutbacks that affect citizens’ daily lives and broader issues like Brexit and the treatment of migrants.

Britain's Prime Minister Theresa May and her husband Philip leave after voting in local government elections in London, May 3, 2018. (Photo: Reuters)

Holding Conservative strongholds in London’s Westminster and Wandsworth boroughs is seen as the dividing line between a bad day and a terrible day for May. Expectations are low enough that May could lose seats elsewhere, but still emerge with credit.

Results in the London borough of Barnet, which has no overall political control, could provide a boost for May if criticism over anti-Semitism in Labour affects the votes of its large Jewish population and prevents Corbyn’s party from taking control there for the first time.

“I think some of the predictions about the outcome (have been) a bit wild, but we will be campaigning across the country, as we have been, to return more Labour councillors and have more Labour councils to protect people from the impact of Tory (Conservative) austerity,” a Labour spokesman said.

The outcome outside the capital is likely to be less clear-cut.

May was punished right across the country in a general election last summer, losing her parliamentary majority after a campaign that alienated core voters with unpopular social policy and saw her style criticized as robotic and impersonal.

But in recent weeks May’s ratings have been boosted by her handling of national and international crises such as her decision to take military action in Syria and a row with Moscow over the poisoning of a former Russian spy in southern England.

Corbyn by contrast has been criticized by opponents and some in his own party for misjudging the public mood in his responses.

“The last few weeks have reminded some in the Labour heartlands why they don’t like Jeremy Corbyn,” said Robert Hayward a former Conservative lawmaker who now sits in parliament’s upper house and specializes in polling analysis.

One bellwether result will come in Trafford in the northern city of Manchester. While Labour dominate politics in the wider region, the Conservatives have held control of Trafford council since 2004, making it a key target for Labour and one May’s party would desperately not want to lose.

Results in other parts of the country where Brexit has been a dominating factor in recent years will also be closely watched.

Of most interest will be how the votes previously hoovered up by the anti-EU UK Independence Party, which has collapsed in popularity since the Brexit vote, are redistributed among the main two parties.

A swing to the Conservatives in pro-Brexit areas like Peterborough and the industrial regions across central England will be taken as a much-needed endorsement of May’s EU exit strategy.