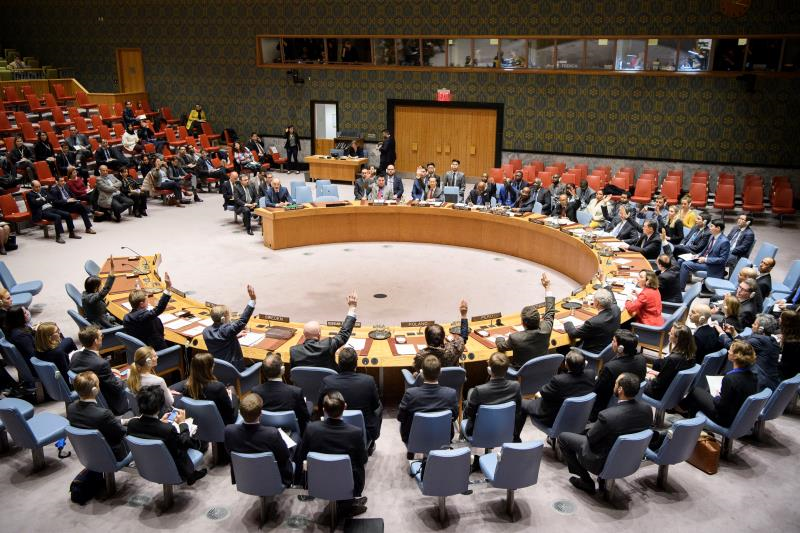 The Security Council unanimously adopts Resolution 2401 (2018) on the immediate cessation of hostilities to allow for medical evacuation and services in conflict areas, and to provide access of humanitarian aid in Syria. Photo: UN

Since February 9, the Security Council has attempted to draft an agreeable resolution on the Syrian truce presented by Sweden and Kuwait. However, due to member disagreement, voting remained blocked.

Since the Syrian conflict began nearly seven years ago, the Security Council has been deeply divided, with Russia backing President Bashar Assad's government with the US, Britain, and France supporting opposition forces.

According to media reports, an earlier resolution draft called for a cease-fire between all factions in efforts to provide civilian relief. But the draft excluded military operations against Islamic extremist groups.

It was this last point that became a source of disagreement between member states which further delayed voting.

After a marathon session behind closed doors, the Security Council voted on the draft resolution today. At a vote announced by Kuwait’s  permanent UN representative and new Security Council president, all 15 members of the security body raised their hands in favor of the cease-fire.

Saturday’s resolution read, “All parties cease hostilities without delay and engage immediately to ensure full and comprehensive implementation of this demand by all parties, for a durable humanitarian pause for at least 30 consecutive days throughout Syria, to enable the safe, unimpeded and sustained delivery of humanitarian aid and services, and medical evacuations of the critically sick and wounded, in accordance with applicable international law.”

The temporary truce does not apply to military operations against the Islamic State, al-Qaeda, Nusra Front and “other terrorist groups as designated by the security council.”

Following Saturday’s unanimous vote, US Ambassador to the UN Nikki Haley expressed hope that the cease-fire measure would be a turning point for Council unity.

"All of us must do everything we can to make the demands of this resolution a reality, it's the only way to restore the credibility of the Security Council," Haley said.

Russian Ambassador to the UN Vasily Nebenzya addressed the Council and said that immediate implementation of an earlier resolution draft was “not feasible,” as all parties on the ground needed to make a concrete commitment to the pause in hostilities.

Nebenzya called the cease-fire resolution “unrealistic,”  and that it wouldn’t address the issues at hand.

China’s Ambassador to the UN, Ma Zhaoxu, said that through the efforts of all concerned parties, the Council was able to reach a solution encompassing a member state consensus.

"The unanimous voice of the Security Council on the humanitarian issue in Syria will help ease the overall humanitarian situation, help to cement the ceasefire in Syria, and combat terrorism and contribute to the overall political settlement of Syria," Ma said.

Ma emphasized that a political settlement was the only way to ease the situation in Syria and relieve civilian suffering.

“The international community should support all Syrian parties to use the good offices of the United Nations and expeditiously seek a solution acceptable to all parties so that the Syrian people can end their suffering sooner rather than later,” said Ma.