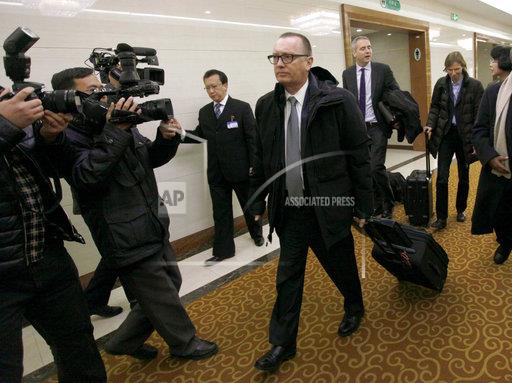 Jeffrey Feltman's visit -- the first by a UN diplomat of his rank since 2010 -- comes less than a week after North Korea said it test-fired a new ballistic missile capable of reaching the United States.

Feltman shook hands with a North Korean foreign ministry official after flying into Pyongyang from Beijing on the North's Air Koryo.

His trip comes a day after the United States and South Korea launched their biggest-ever joint air exercise -- manoeuvres slammed by Pyongyang as an "all-out provocation".

Feltman, the UN's under secretary general for political affairs, arrived in China on Monday as Beijing is one of the few transit points to North Korea in the world.

He met with a Chinese vice foreign minister while there.

China, which is Pyongyang's sole major diplomatic and military ally, has called on the United States to freeze military drills and North Korea to halt weapons tests to calm tensions.

In the North, Feltman will discuss "issues of mutual interest and concern" with officials, UN spokesman Stephane Dujarric said, adding he was unable to say whether the envoy will meet the reclusive state's leader Kim Jong-Un.

"The first step -- that North Korea agreed to have (Feltman) visit -- is a positive sign," Wang Dong, an international studies professor at Peking University, told AFP.

"If the diplomatic effort is successful, then they will certainly be able to exercise some persuasion."