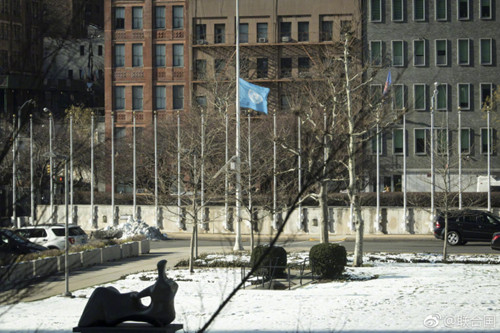 11 December 2017 – The United Nations mission in the Democratic Republic of the Congo (DRC) on Monday paid tribute to the Tanzanian peacekeepers killed on 7 December in the worst attack on UN 'blue helmets' in recent history.

At the ceremony in the north-east city of Beni, the Deputy Special Representative of the Secretary-General in the DRC, David Gressly, encouraged the mission's military, police and civilian staff to continue their efforts to implement the operation's mandate, including the protection of civilians. 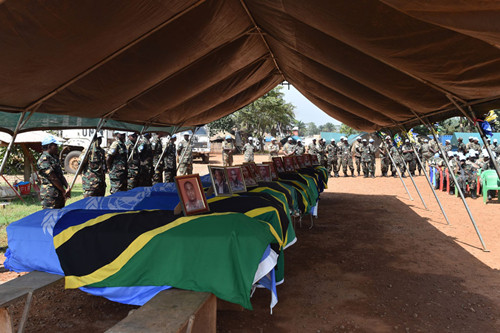 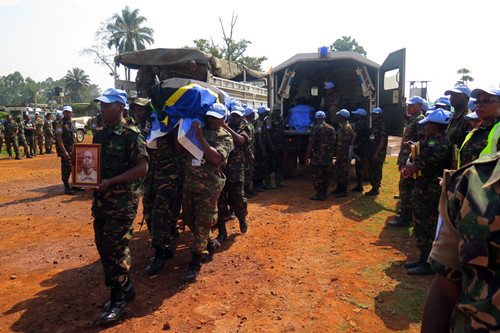 Ceremony in Beni, Democratic Republic of the Congo. The fallen peacekeepers were praised for their bravery, courage and professionalism in carrying out efforts to restore peace in the territory. (Photos: Alain Coulibaly/ MONUSCO)

"We are determined to continue our work,” the Deputy Special Representative stressed.

"What is important now is to stay engaged [...] to protect civilians, especially towards Kamango,” Mr. Gressly told UN Radio Okapi referring to the road which passes by one of the UN peacekeeping base enroute to Kamango, on the eastern border of DRC and Uganda.

The bodies of the 14 blue helmets were repatriated to Tanzania later Monday. News reports suggest that the bodies were ceremoniously received in Dar es Salaam by Tanzanian defense and military officials.

In the wake of the incident, Secretary-General António Guterres and the UN Security Council condemned the deadly attack, with the UN chief expressing his “outrage and utter heartbreak.”

"These deliberate attacks against United Nations peacekeepers are unacceptable and constitute a war crime,” said Mr. Guterres, urging the DRC authorities to investigate the incident and quickly bring the perpetrators to justice.

"There must be no impunity for such aggression, here or anywhere else,” he added.